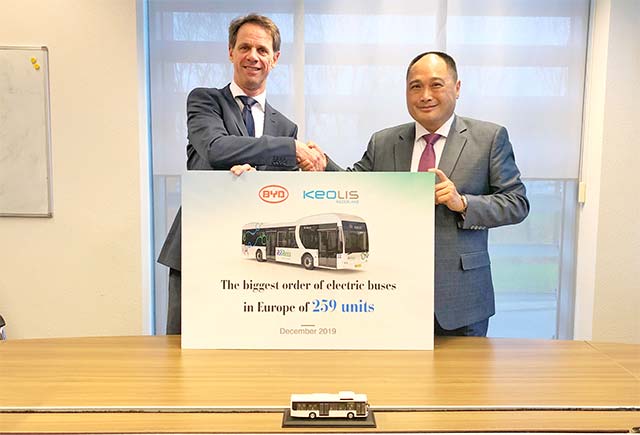 BYD has secured the largest ever single order for electric buses in Europe in a deal with Keolis Nederland BV, the Dutch subsidiary of global public transport provider, Keolis.

“This is a momentous occasion for BYD,” said BYD Europe Managing Director, Isbrand Ho, “and also represents a huge commitment to electric mobility since it becomes the largest European fleet ever switched to electric at one time”

The deal was reached following close cooperation between Keolis and BYD to devise a demanding whole-life package which delivers a total transport solution and takes into account operational needs and passenger comfort requirements.

The deal was confirmed on Friday 6thDecember at Keolis’ head office in Deventer in the Netherlands with the contract being signed by Frank Janssen, the CEO of Keolis Nederland and Isbrand Ho, Managing Director of BYD Europe. This latest order follows a number of recent significant deals for BYD with major public transport operators right across Europe – further reinforcing BYD’s strong and leading position in Europe where it has made deliveries and taken orders in nearly 60 cities and more than 10 countries, to-date totaling more than 1,200 electric buses.

For Keolis Nederland, BYD’s 8.7-metre midi bus, 12-metre and new 13-metre electric bus models will enter service from the end of 2020 on routes throughout the Netherlands’ IJssel-Vecht region, including front-line operations in the municipalities of Zwolle, Apeldoorn and Lelystad. BYD’s 13-metre modelis equipped with new upgraded battery technology to provide extended range and ‘city-to-city’ capability.The majority of the Keolis order comprises 206 of BYD’s best-selling 12-metre model all of which will be equipped with pantographs.

In 2016, the Dutch minister of Traffic and Infrastructure signed a covenant which aims to reduce emission, such as CO2, Nox and PMs by 2025. Keolis has surpassed this target by operating almost emission free straight from the start of the concession.

With its headquarters in Rotterdam, the Netherlands, has provided BYD with a staging post to extend its European activities, and has also seen some strategically important orders for the company. Notably in 2012, BYD won its first European order to supply six electric buses to the Dutch national park island of Schiermonnikoog, the first public tender for electric buses in Europe. High profile deals followed soon after, including 35 BYD electric buses for Schipol Airport – the first airport worldwide to adopt airside electric mobility. In just seven years, BYD has delivered electric mobility to Public Transport Operators in towns and cities right across Europe, emerging today as the market-leading electric bus brand.

Frank Janssen, CEO Keolis Nederland is delighted and proud to partner with BYD in operating the largest zero emission bus fleet in Europe starting December 2020. “It is another milestone for Keolis Nederland and the Keolis Group in developing and deploying electromobility solutions around the world and it reaffirms our commitment to supporting public transport authorities in the transition to sustainability. We’ve chosen BYD due to our excellent experience with their e-buses. These are a fundamental part in our daily operation to the full satisfaction of our passengers and employees. Furthermore we trust in BYD’s expertise as a manufacturer in developing and maintaining battery-packages.”

“This is another landmark deal for BYD in Europe,” said BYD Europe Managing Director, Isbrand Ho, “but, this is more than simply building and supplying 259 electric buses – significant though that is – we have worked tirelessly with Keolis to provide a complete transport solution. Delivery programmes on this scale,” he said, “can only be achieved through excellent cooperation and by striking up a long-term partnership. Our relationship with Keolis provides an excellent template to explore opportunities with other large fleet operators.”

This announcement of the Keolis order, the largest in European history, further underlines BYD’s credentials as the world’s leading electric bus manufacturer, after last month’s order from public transport operator, TransMilenio SA, in the Columbian capital of Bogotá to supply 379 electric buses scheduled to enter service in September 2020.