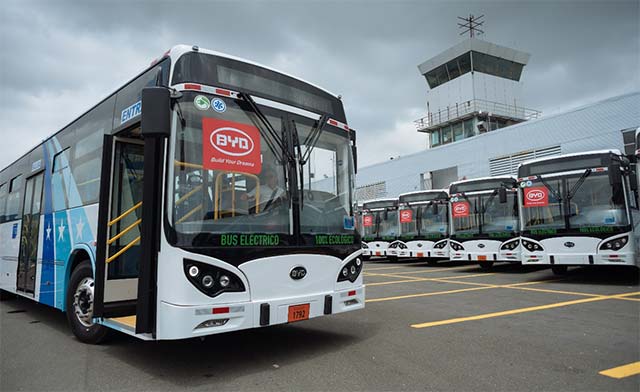 This follows BYD’s first delivery of an electric vehicle fleet to Ecuador in April 2017, when the company introduced the country’s first pure taxi fleet.

The electric bus fleet will be operated by Saucinc, a Guayaquil bus operator. Prior to the delivery, a trial operation was carried out with a bus running a daily average of 250km in Guayaquil from November 2017 to March 2018, during which over 72,000 passengers could experience an electric bus service for the first time.

The bus fleet service operation is expected to eliminate 12.8 tons of CO2 emissions and the consumption of 2.9 million gallons of diesel, representing a cut of USD 8 million in costs for the Ecuadorian government, which currently subsidizes fossil fuel for public transportation. BYD‘s advanced technologies will provide bus drivers with a comfortable drive and increased road safety, with features such as speed limit control via software, and indoor cameras.

The event was attended by the mayor of Guayaquil, Mr. Jaime Nebot, when he announced that the state will pay for 50% of the energy costs during the first year of operation of both electric taxi and bus operators. In addition, the government will provide a bonus between USD 2,000 to 3,000 for every electric taxi driver.