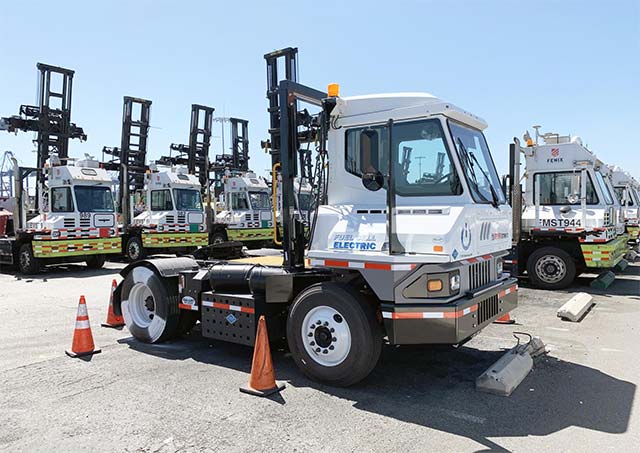 The UTR prototype, known as “UNO,” made its first productive moves around the Fenix container terminal last month, but the formal announcement was made today before a crowd of leading officials, operators, industry experts and supply chain innovators.

The UNO was imagined and developed by Toyota engineers and deployed at the Fenix terminal as a test of how zero-emission container handling equipment could operate in a real-world, marine terminal environment.

Fenix’s terminal, located at Pier 300 in the Port of LA, handles over one million containers per year and deployment of the UNO will help to meet its ongoing commitment to the Port’s Clean Air Action Plan goals.

“The UNO deployment demonstrates how cutting-edge environmental technology and maritime operations are not mutually exclusive,” said Gene Seroka, executive director of the Port of Los Angeles. “We applaud Fenix for constantly looking at how to move containers in the most economical and environmentally efficient way.”

“We appreciate the partnership with Toyota,” said Scott Schoenfeld, general manager of Fenix’s terminal development group. “This deployment is hopefully the first of many zero and near-zero emissions platforms throughout the facility.” In the next few months, Fenix will look at testing a “Hydrogen Electric Hybrid Top Pick” to assist with cargo movement through the terminal.

The San Pedro Bay Clean Air Action Plan (“CAAP”) passed in 2008 and updated most recently in 2018, focuses on the increased use of near-zero and zero-emission CHE (“Container Handling Equipment”) by 2030 in order to meet, and exceed, statewide air emission goals.

The UNO is powered by the same modular fuel cell foundation as Toyota’s zero emission Mirai electric passenger cars and Project PORTAL electric semi-truck prototypes. The hydrogen fuel provides quicker refueling time than battery-electric options. The first UNO test cycle at Fenix ran for 2.5 hours per trial on the rail and consumed one fill of its two hydrogen tanks. Additional tanks can be added for the desired range and can be filled in around 3 minutes, allowing much quicker options to get back on the road than battery.