Electrification and the evolution of INFINITI design 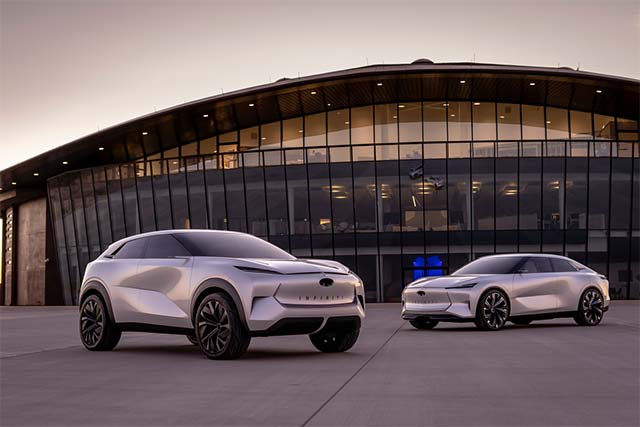 This year INFINITI celebrates 30 years of looking forward. Since its launch in November 8, 1989, INFINITI has introduced new technologies, daring designs, and innovations that have delivered significant advances in the automotive industry. The brand now lays out its future vision as it moves into the era of electrification.

As INFINITI looks to the future and the roll-out of a series of electric and electrified vehicles, the brand will also see a change in the way its cars are designed.

Over the three decades since INFINITI was first established, the design of the brand’s vehicles has transformed. Cars have evolved as tastes and expectations have changed, and as new trends have emerged, such as the rise in popularity of SUVs and crossovers. Innovations in assembly techniques, vehicle architecture, and aerodynamics have also played a role in progressing the look of INFINITI vehicles.

Despite these changes, design adaptations have been evolutionary rather than revolutionary. Vehicle platforms and the design on top have predominantly revolved around a car’s powertrain – the internal combustion engine – accommodating an engine, fuel tank, transmission and drive shafts.

Everything in proportion
Powertrain electrification, however, marks a significant moment in car design, with designers no longer shackled by the mechanical layout of a traditional powertrain. Not required to design a vehicle around the internal combustion engine, propshaft, fuel tank or transmission, designers have the freedom to offer more efficient packaging and new vehicle proportions.

As it creates its next generation of vehicles, INFINITI is seizing this opportunity, echoing the character of powerful and serene new electric and electrified powertrains in the very design of its cars. While the aesthetics of the brand’s cars have always been defined by the engines under the hood, future designs will hint directly at the potency and character of INFINITI’s electrified powertrains.

Fundamental to this is a shift in the very proportions of the vehicle. INFINITI’s famous V6 gasoline engines have historically resulted in a long hood and a cab-rearward silhouette. In future, electrification will cause an evolution in the structure of the car, with low-mounted batteries likely to raise the driving position – while lowering the center of gravity at the same time.

The 2019 INFINITI Qs Inspiration Concept, for example, introduces a distinctive new body style which challenges the accepted ‘three-box’ sedan layout. Previewing a future production vehicle from the brand, the concept’s electrified powertrain presents the notion of a sports sedan which is as engaging and enjoyable to drive as any conventional car. With a low center of gravity and powerful e-AWD system, paired with a commanding, elevated driving position, the car suggests how electrification could allow INFINITI to reinvent the ‘traditional’ sports sedan for the future.

Ma
As vehicle proportions evolve, so too will the design details. Signaling the nature of new electric or electrified powertrains, INFINITI is adopting a new ‘Powerful Serenity’ form language for the era of electrification. Inspired by recent concepts such as the QX Inspiration and Qs Inspiration, future INFINITI models will look as progressive, seamless and powerful as their electrified powertrains. This form language will be infused with Japanese DNA, drawing upon the culture and modern architecture of INFINITI’s home country.

The brand’s designers took inspiration from the Japanese spatial concept of ‘Ma’, described as an emptiness full of possibilities, potential and anticipation. Applied to INFINITI’s upcoming electric vehicles, designs will emphasize the smooth, muscular spaces between the sharp, sheer lines of the bodywork, building visual anticipation for the electrified performance within. What happens between these lines is truly expressive; empty spaces which carry the loudest message. Utilizing the ‘Ma’ philosophy will ensure all future INFINITI cars feature svelte, graceful and uncluttered designs. Further Japanese influences will include body surfaces and creases inspired by origami, the Japanese art of folding paper, and technical ‘kimono fold’ patterns, inspired by the straight lines that typify modern Japanese architecture.

This form language serves a practical purpose, too. With no cool air required to cool an engine, future INFINITI models will do away with traditional air intakes at the front of the car. Instead, cars will display the outline of a grille, proudly bearing the company’s logo, while air will be channeled around the body for aerodynamic efficiency, essential for helping to preserve battery life and increasing range.

Lounge-like interiors
Opening the doors on INFINITI’s most recent concept cars reveals the packaging benefits brought by electrified powertrains. With less space required for engines, and the flat packaging of a battery pack beneath the floor, INFINITI will be able to create larger, more spacious cabins – lounge-like interiors which provide more passenger space and comfort.

INFINITI has always sought to create interior spaces that enhance the driving experience, while cossetting passengers. The brand’s recent Qs Inspiration and QX Inspiration concept cars have shown the potential for this approach in future, with beautiful, handcrafted interiors. Spacious and comfortable for occupants, they remain focused on connecting drivers to the car and road ahead, empowering them with a clear view and a powerful, serene driving experience.

The brand’s latest concept vehicles – Q Inspiration, Qs Inspiration and QX Inspiration – each represent INFINITI’s desire to continually challenge tradition and discover ‘the new’. This is familiar territory for a company that launched the FX in 2002, the world’s first sports crossover – and a car which evolved beyond the established ‘two-box’ SUV design trends of the late 1990s.

INFINITI has spent 30 years looking forward with its designs, and powertrain electrification opens new doors for the brand as it transforms how its cars will look in future.