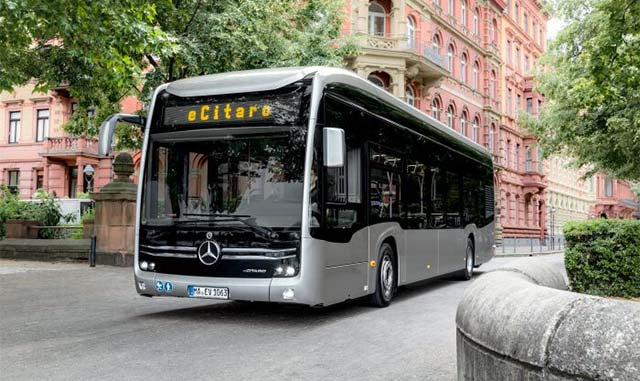 Starting in 2021, public transport company Hamburger Hochbahn AG, will be field-testing the new Mercedes-Benz eCitaro articulated bus with a fuel cell as a range extender. The corresponding letter of intent was signed earlier this week by Henrik Falk, Chair of the Board of Hamburger Hochbahn AG and Till Oberwörder, Head of Daimler Buses. Mercedes-Benz will deliver two correspondingly equipped buses during the course of 2021.

Just as announced a year ago at its world premiere, the all-electric and locally emission-free eCitaro’s further development is proceeding rapidly. Already next year, a new battery generation will bring a significant increase in capacity and therefore range. Then the eCitaro G articulated bus will also be rolled out. The next step will be the eCitaro G with a fuel cell as a range extender. As a result range is increasing.

Henrik Falk, Chair of the Board of Hamburger Hochbahn AG: “We anticipate a number of advantages to arise from the new development of the fuel-cell bus based on the purely electric vehicle, especially when it comes to covering greater ranges. And following the world premiere of the electric bus in Hamburg, the 2021 launch of this latest development in Hamburg highlights our pioneering role in operating emission-free buses. Now, it’s all about getting those vehicles on our roads as fast as possible”.

Till Oberwörder, Head of Daimler Buses: “We’ve already implemented many ambitious projects with Hamburger Hochbahn AG. And the eCitaro G with range-extending fuel cell is one the decisive steps on the road to locally emission-free and extremely quiet public transport using city buses.”

The Mercedes-Benz Citaro is the tailor-made city bus for the future of public transport. With its modular battery packs, the solo bus now has a total battery capacity of up to 292 kWh. This gives the low-floor bus a system-relevant range of around 170 km without recharging under all weather conditions. With the fuel cell as a range extender, the eCitaro is anticipated to achieve a system-relevant range of up to 400 km depending on the vehicle configuration and equipment. It can then seamlessly replace conventionally powered buses.

The eCitaro is based on the best-selling Mercedes-Benz Citaro city bus. Already, more than 55,000 vehicles of both vehicle generations of the Citaro have been sold, and the Citaro has become part of city traffic in nearly every major city in western and central Europe as well as on several continents. The bus is available in the Citaro, Citaro hybrid, Citaro NGT and Citaro NGT hybrid versions. The four-axle, large-capacity CapaCity articulated bus is derived from the Citaro. Large numbers of this are also in use in Hamburg.

With around a thousand city buses, Hamburger Hochbahn operates 113 lines with 1353 stops. These buses carry around 214 million passengers a year. The close cooperation between Mercedes-Benz and Hamburger Hochbahn AG has a long tradition. In 1997, the company from Hamburg was among the first customers of first-generation Citaro buses. Since then, Mercedes-Benz has delivered over 1,500 Citaro and CapaCity buses to the company.

Whether it’s the joint development of articulated pusher buses more than four decades ago or the field-testing of the Citaro FuelCELL, Citaro G BlueTec Hybrid and Citaro FuelCELL Hybrid in the past years – Mercedes Benz and Hochbahn have been driving for innovative and “green” technology together for a long time.

Sep 8, 2019Blagojce Krivevski
Midwest EVOLVE Gets ‘Butts in Seats’ during National Drive Electric WeekHybrid and electric models are the most reliable new cars in the UK