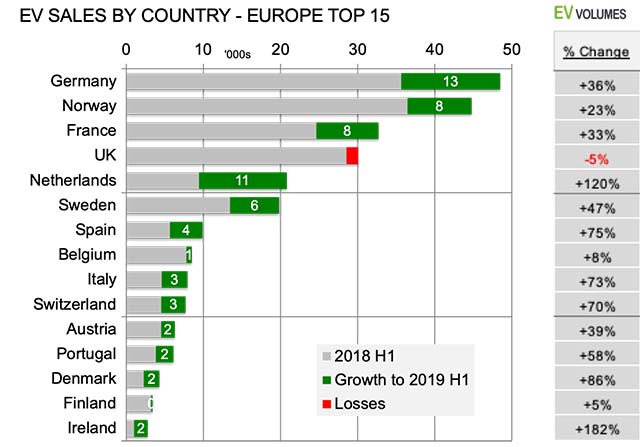 Plug-in vehicle sales in Europe reached 259,000 units in the first half of 2019, 34 % higher than for 2018 H1. These include all Battery Electric Vehicles (BEV) and Plug-in Hybrids (PHEV) in EU and EFTA countries, passenger cars and light commercial vehicles.

The change reflects the introduction of the more stringent WLTP for fuel economy ratings, changes in taxation/grants promoting more BEV uptake and better supply of long-range BEVs. The hiatus in PHEV offers continued, with several popular model being upgraded with longer e-range for the 2020 model-year. Year-on-year, PHEV volumes actually declined, loosing 12 300 units (-13 %) during the first 6 months, while BEVs had 79 % more sales.

The OEM ranking changed a lot, too, with Tesla becoming #1 by 38,000 Model-3 deliveries in H1. The Model-3 was the best seller in the sector posting 12 500 units more than the previous #1, the Renault Zoe. BMW, Volkswagen and Daimler suffered from pending upgrades of popular PHEV models, with deliveries starting in Q3 and Q4 this year. Winners were Hyundai-Kia, Renault, Mitsubishi and Jaguar-Land Rover.

Germany and the Netherlands were the strongest growth contributors, in terms of volumes. Germany has become the largest market for plug-ins in Europe, displacing Norway to the #2 position for the first time. Norway is still the word leader in EV uptake, with a share of 47 % in this year’s light vehicle sales, up 10 %-points from 2018 H1.

Among the top-15 markets, UK is the only one in reverse this year. PHEVs lost their subsidies and BEV get 1,000 GBP less than last year. The UK plans to set the BIK (Benefit In Kind) for company car taxation to zero for BEVs, starting in April 2020. This will postpone many BEV purchases to next year in the UK. Meanwhile, neighbour Ireland has become the fastest growing plug-in market in Europe.