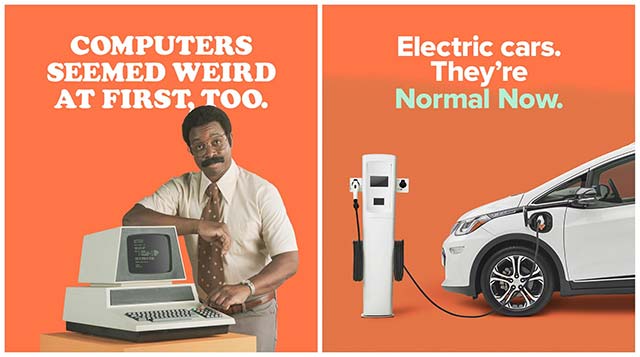 The “Normal Now” campaign aims to introduce and normalize zero-emission vehicles for the vast majority of Americans who are not aware of or have never considered switching to a zero-emission vehicle. Through comical :15 videos, GIFs and still images, the “Normal Now” campaign draws comparisons between “new technology” of the past – including cell phones, smart watches and online dating – and what is assuredly the transportation method of the future. The campaign explores how scary previous forms of “new technology” were at first and reinforces that – just like EVs – while it may have seemed weird at first, it’s normal now.

“A large percentage of the car buying public cite functional concerns about EVs, like range anxiety, charge time and cost, as reasons why they wouldn’t drive electric; however, the Normal Now campaign is inspired by the insight that there is actually a deeper, more emotional set of barriers standing in the way of consideration and adoption,” said Richard Steinberg, Senior Director of Green Cities, Marketing and Communications at Electrify America. “We believe that fear of change and lack of exposure to EVs in pop culture is making people view electric vehicles as too different from what they’re used to, and therefore are striving to normalize EVs with this latest educational campaign.”

This brand-neutral campaign, developed with creative agency Eleven, will run nationally through December 2021.

“Yes, people scratched their heads when the flying machine, computer, and cell phone were introduced, but soon after these advancements became woven into our everyday lives,” said Mike McKay, Chief Creative Officer, Eleven. “We believe the electric car is becoming fully embraced as well, and our Normal Now campaign is a simple reminder that electric cars are here to stay.”

The digital-only campaign, which includes some elements that will also be available in Spanish, is part of a $42 million education and public awareness initiative. Electrify America, a subsidiary of Volkswagen Group of America, is investing $2 billion over a 10-year period in zero emission vehicle infrastructure and awareness.