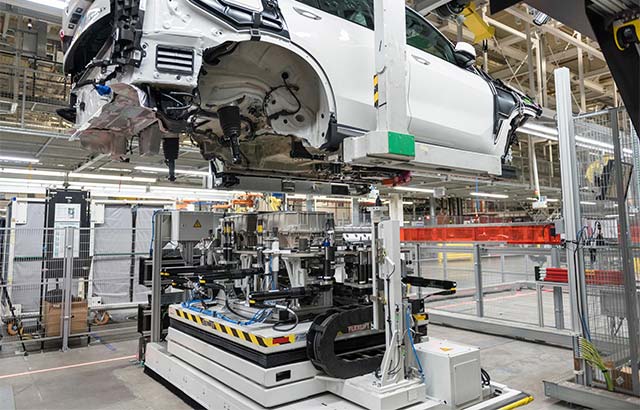 BMW Group Plant Spartanburg has more than doubled its capacity for battery assembly prior to the debuts of the plug-in hybrid electric variants of two of its most popular models.

The new, higher performing, fourth-generation batteries will be assembled on-site for the BMW X5 and BMW X3 plug-in hybrid electric variants.  The 2020 BMW X5 xDrive45e Sports Activity Vehicle will begin production in Spartanburg, SC, on August 1. Production of the BMW X3 xDrive30e will begin in December.

With the expansion of the battery facility at Plant Spartanburg in the U.S., the BMW Group is following the principle of local value creation. “We have invested approximately $10 million USD to install a new battery assembly line and expanded the area to 86,000 square feet. This means we could double the number of batteries produced if needed to meet market demand,” explains Michael Nikolaides, senior vice president engines and electrified drivetrains, BMW Group.

In addition, BMW Group has invested a further $10 million USD to support the production of the new PHEV models.

More than 120 employees were specially trained to work the new line, having completed an extensive program in battery production, robotics and electrical inline quality inspection along with end-of-line testing.  An additional 225 vehicle assembly workers received training in the production of electrified vehicles, adding to the Plant’s already skilled staff.

“We have assembled batteries on site at Plant Spartanburg since 2015, making BMW Group a pioneer of electromobility in the U.S.,” said Knudt Flor, president and CEO, BMW Manufacturing, Co, LLC. “The BMW X5 and X3 are currently among the best-selling BMW models in the U.S. and we anticipate that their PHEV variants will also be well-received by BMW customers.”

BMW Group Plant Spartanburg is the global center of competence for BMW Sports Activity Vehicles and Coupes and produces BMW X3, X4, X5, X6 and X7 models and their variants.  Since starting production 25 years ago, the plant has built more than 4.6 million BMW vehicles for the U.S. market and the world.  In 2018, data from the U.S. Department of Commerce confirmed that BMW Manufacturing was the largest automotive exporter by value for the fifth consecutive year.