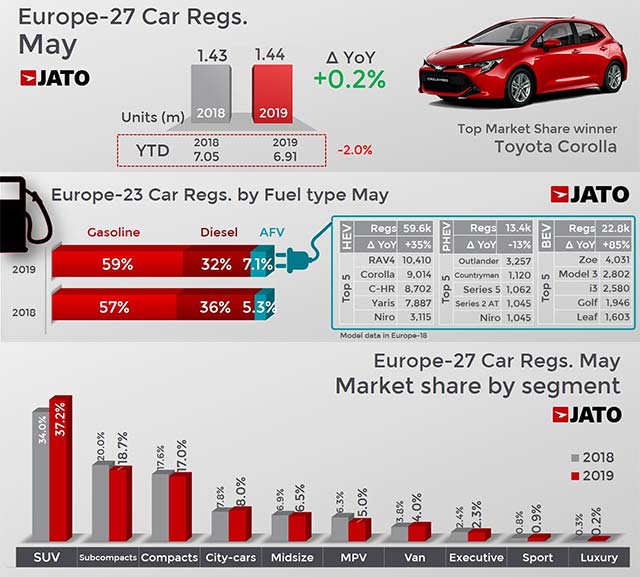 The European car market remained stable in May 2019 for the second month in a row. In total, 1.44 million vehicles were registered – a 0.2% increase on May 2018. The stable results from April and May signify an end to the market’s extended period of decline between September 2018 and March 2019. However, year- to-date figures show 6.91 million vehicles have been registered so far in 2019 – a decline of 2% on the same period last year.

Despite the market’s slowdown this year, last month was the highest volume registered in the month of May since 2007, when registrations also totalled 1.44 million units. Explaining the results, Felipe Munoz, JATO’s global analyst, said: “The market had a welcoming response to the latest vehicle launches in May. Moving forward, there’s still a long way to go until we see real progress with EVs, which means SUVs will continue to be the best hope for carmakers selling cars in Europe.”

SUVs once again drove market growth in May, offsetting the drops posted by the traditional segments. While demand for subcompact, compact, midsize and executive/luxury cars and MPVs fell during the month, demand for SUVs was up by 10% to 534,700 units. SUVs continued to dominate the European market, as they counted for 37.2% of total registrations and posted a market share increase of 3.2 percentage points on the same time last year. Year-to-date figures show 2.56 million SUVs have been registered so far in 2019 in Europe – an increase of 8%.

Registrations of pure electric, plug-in hybrid and hybrid cars totalled 94,000 units in 18 European markets in May, counting for 7.1% of the total volume.

The majority of registrations came from hybrid vehicles, but the growth was driven by pure electric cars, where registrations jumped from 12,300 units in May 2018 to 22,300 last month.

The Renault Zoe was the top-selling electric car last month, but the Tesla Model 3 continues to lead the year-to-date rankings. However, registrations for the Model 3 fell from 15,755 in March to 3,659 in April, and 2,820 in May.

“A large part of Tesla’s global plans depend on how the brand can maintain the sales growth of the Model 3. The sedan needs to continue to grab the attention of consumers in Europe, as US demand has almost peaked already. The initial good start we saw in March has somewhat dissipated in April and May,” said Munoz.

[source: JATO Dynamics]
Jun 25, 2019Blagojce Krivevski
Brits could save more than £41,000 on fuel in a lifetime by switching to an electric vehicleFully charged, two years ahead of schedule: BMW Group steps up the pace of e-mobility expansion