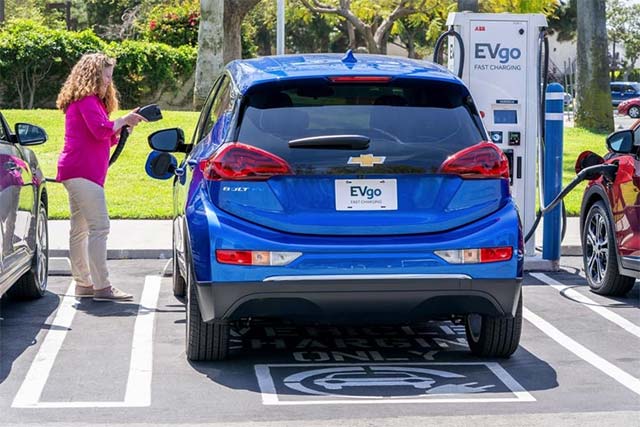 EVgo, the nation’s largest public EV fast charging network, announced that it has contracted for 100% renewable energy to power its customers, becoming the first EV charging network in the United States to do so.

EVgo contracts with its energy suppliers and renewable energy certificate (REC) partners to ensure that each gigawatt-hour delivered on its fast charging network financially supports an operating renewable energy generator in the U.S. EVgo’s 100% renewables commitment was announced today as part of the spring member meeting of the Renewable Energy Buyers Alliance (REBA), of which EVgo is a member.

Across the country, EVgo is buying a combination of Green-e® certified wind and solar energy through its electricity suppliers and REC partners. In California, EVgo is currently procuring 100% solar RECs from California and intends to purchase bundled renewable energy from its partners as they become certified through the California Air Resources Board Renewable Energy Pathways program.

According to the U.S. Environmental Protection Agency, nearly 30% of all greenhouse gas emissions in the United States come from transportation – the majority of which are generated by passenger cars and other light-duty vehicles – making the sector the nation’s largest source of carbon emissions and therefore, the country’s leading contributor to climate change attributed to human activity.

“At EVgo we understand that our customers value all the ways EVs deliver a delightful driving experience, from better acceleration to eliminating tailpipe emissions,” said Julie Blunden, Executive Vice President for Business Development at EVgo. “EVgo is the national leader in customer satisfaction and we plan to extend that lead with 100% renewable energy powering every mile charged on our convenient and reliable fast charging network.”

EVgo plans to double its network capacity by year-end 2020, dramatically increasing the number of convenient locations for drivers to fast-charge while running errands or having fun at the park. Based on the mix of power sources across its network in 2018, EVgo avoided 17 thousand metric tons of carbon emissions, the leading source of greenhouse gas pollution. Today’s news and continued growth in fast charging will expand EVgo’s contributions to decarbonizing transportation.

[source: EVgo]
May 17, 2019Blagojce Krivevski
Daimler aims to have a carbon-neutral fleet by 2039; plug-ins to make more than 50% of its car sales by 2030Renault unveils three electric concepts for future mobility