The eco-balance of the Mercedes-Benz GLC F-CELL 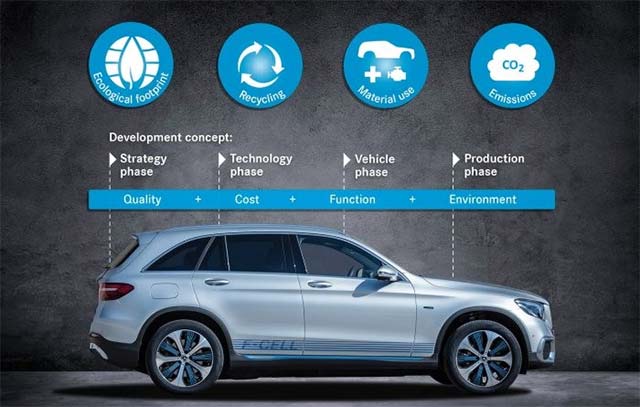 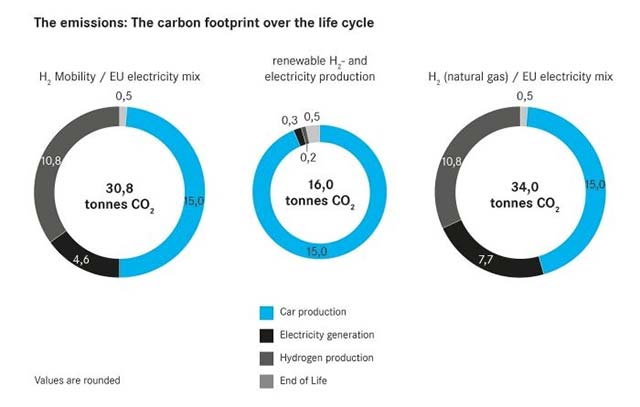 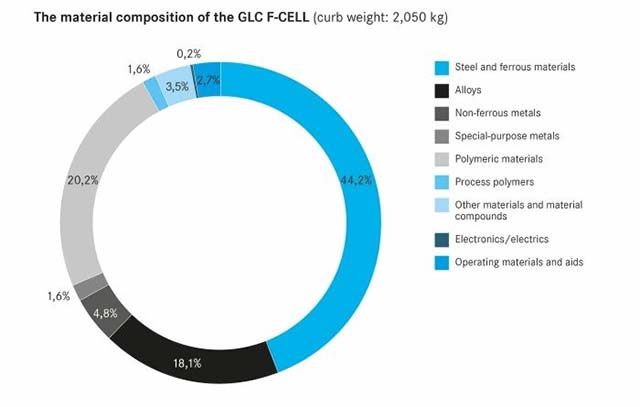 Only an analysis of the vehicles’ entire lifecycle provides a realistic picture. Mercedes-Benz has been conducting this environmental check regularly since as early as 2005, starting with the S-Class at the time. Depending on the segment, Mercedes-Benz bases its calculations on a driving distance of 150,000 to 300,000 kilometres.

Thanks to emission-free driving, electric vehicles can compensate for a large part of the additional CO2 emissions they initially cause. If it is possible to operate electric vehicles using only renewable energy, the CO2 emissions over the entire lifecycle fall by 70 percent compared with combustion-engine vehicles. The same applies to fuel cell vehicles, which give rise to more emissions in production but slightly fewer than batter vehicles in operation, and where the supply of hydrogen has a major influence on the overall effect.

However, the 360° environmental check is not only about CO2 emissions. In order to gauge a vehicle’s environmental compatibility, the experts consider all emissions and the use of resources over the entire lifecycle. This is achieved by means of an eco-balance that records the key environmental impacts. It includes the extraction of raw materials – the use of platinum in the fuel cell has been reduced by 90 percent compared to the B-Class F-CELL – production and use, and finally recycling. Development of the components in the new powertrain was accompanied by concepts for eventual recycling. This means that as with every other Mercedes-Benz, a high level of recyclability is also assured for the GLC F-CELL.

Different CO2 scenarios depending on the power and hydrogen source

As in all electric vehicles, how the necessary power is generated is also the decisive factor for the Mercedes-Benz GLC F‑C ELL: 100 percent renewable, e.g. hydroelectric power, or e.g. in the EU power mix. The same question arises with respect to the generation of hydrogen: the scenarios considered in the eco-balance are reformation from natural gas, the so-called H2 mobility scenario (50 % regenerative, 50 % from natural gas), and 100 percent generation of hydrogen from electrolysis using hydroelectric power.

The eco-balance, and especially the CO2 balance, varies accordingly over an entire lifecycle with a mileage of 200,000 kilometres. While the components specific to the GLC F-CELL lead to considerably higher CO2 emissions during production, these can in part be considerably overcompensated over the use phase, depending on the hydrogen and power source. The CO2 saving over the entire lifecycle is greatest if the GLC F-CELL is operated exclusively with hydrogen and power from renewable sources. Savings of over 50% are possible compared to the scenario with hydrogen from natural gas and the EU power mix.

Clear objective: further reduction in the use of primary raw materials

The aim of Daimler AG is to reduce the use of primary raw materials for the powertrain and battery technology by 40 percent by 2030. Apart from the economical use of resources, the reconditioning of components and the recycling of the raw materials used play an important role as well.

Advances in lithium-ion battery technology will further contribute to this reduction: Energy density will be further increased, while batteries will become increasingly lighter in weight. The materials composition will change, and materials such as cobalt will be replaced by nickel. This holistic approach also includes the use of vehicle batteries in stationary energy-storage devices after their mobile service life. The aspect of energy supply to the production locations also plays an important role. All Mercedes-Benz plants in Germany will therefore switch to CO2-neutral energy supply, e.g. wind power and hydropower, by 2022. This will reduce the CO2 expenditure in the lifecycle of the vehicles by the amount accounted for by assembly of the components.

The GLC F-CELL: fuel cell vehicle as a plug-in hybrid

The Mercedes-Benz GLC F-CELL is unique worldwide, as it features both fuel cells and a battery drive which can be charged externally using plug-in technology. Apart from electricity, it also runs on pure hydrogen. This has a number of advantages:

– Within three minutes at a hydrogen filling station, the full operating range of over 400 km is available again.
– The battery provides a further 50 km or so of range.
– On downhill stretches and when braking, kinetic energy can be stored in the battery (recuperation).
– The battery provides additional power for brisk acceleration.
– Power from purely renewable sources can be used when charging the battery at a power socket.

Two carbon-fibre encased tanks in the vehicle floor of the GLC F-CELL hold 4.4 kg of hydrogen. Thanks to 700 bar tank technology, the hydrogen supply can be replenished within just three minutes – as quickly as is customary when refuelling a conventionally powered car.With a hydrogen consumption of around 1 kg/100 km, the GLC F-CELL achieves around 430 hydrogen-based kilometres in the NEDC cycle; in hybrid mode it additionally delivers up to 51 km on a fully charged battery.

The lithium-ion battery has a gross capacity of 13.5 kWh and serves as an additional energy source for the electric motor. Plug-in technology makes it easy to charge via the 7.4 kW on-board charger at a standard household socket, a wallbox or a public charging station – from 10 to 100 percent SoC (State of Charge) in approx. 1.5 hours if the full power is used. Just like the drive motor, an asynchronous motor with an output of 155 kW (211 hp) and a torque of 365 Nm, the powerful storage battery is space-savingly installed in the rear of the SUV.