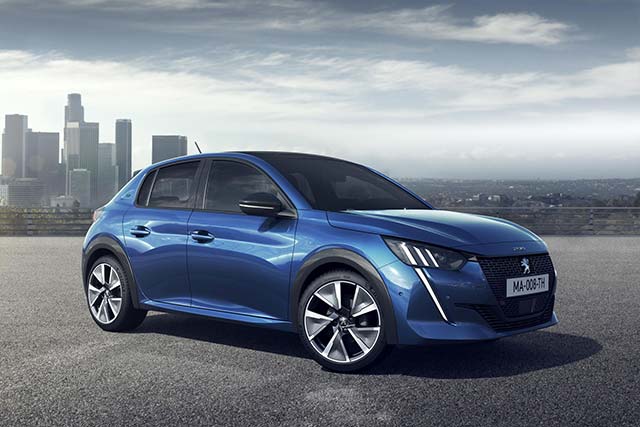 PEUGEOT will be showcasing its new plans for an electric future at the 2019 Geneva International Motor Show, unveiling the all-new 100% electric PEUGEOT e-208 alongside the all-new PEUGEOT 208 petrol and diesel variants and hybrid 508 PEUGEOT SPORT ENGINEERED Concept.

Joining the new models will be a Plug-in Hybrid range and a revamped electrified version of the iconic PEUGEOT Lion.

Visitors to the 2019 Geneva Motor Show will also be able to take a closer look at new Plug-in Hybrid petrol engines for the PEUGEOT 3008 SUV, all-new 508 Fastback and SW. The star of the 2018 Paris Motor Show, the PEUGEOT e-LEGEND CONCEPT, will also be on show as part of an all-electric stand. 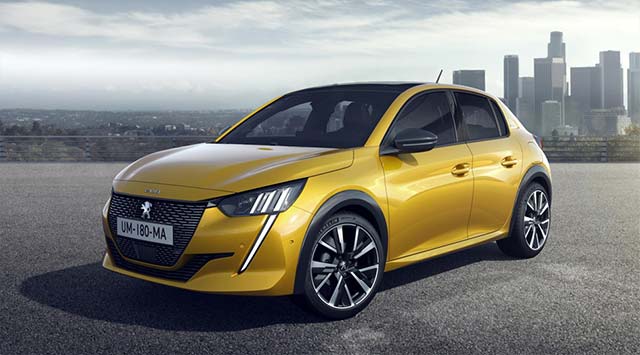 Powered by a 100 kW motor, the all-new PEUGEOT e-208 will be the first electric model available from PEUGEOT’s new electric range. The 5-door hatchback features a 50kWh battery, positioned under the floor to maintain interior space, which provides a range of up to 211 miles (WLTP) from a full charge.

The all-new PEUGEOT e-208 comes with three driving modes: Eco, to optimise range, Normal, tuned for comfort, and Sport, which puts the emphasis on performance. Customers can choose from a range of charging methods for the all-new PEUGEOT e-208, including 100 kW rapid charging, capable of 80% charge in 30 minutes.

The all-new PEUGEOT 208 models bring sporty and irresistible styling to the B sector, designed with features including a full LED three-claw light signature on the front and rear, and a Dichroic colour changing Lion brandished on the front of the electric version.

Inside, the all-new PEUGEOT 208 models feature the latest jump-in next generation in-car technology, including the new PEUGEOT 3D i-Cockpit® and a range of Drive Assist features prioritising the driver’s safety and comfort, including Active Blind Spot Monitoring and Automatic Emergency Brake Assist. 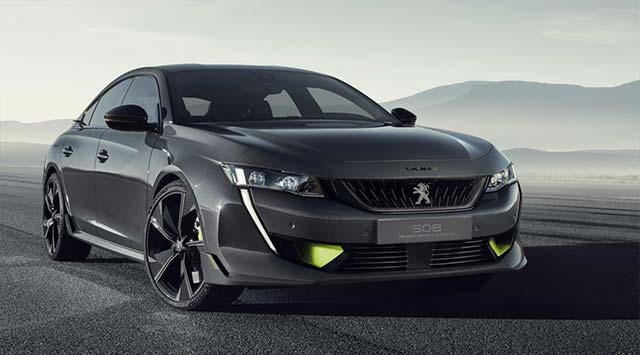 With a 11.8kWh battery, the 508 PEUGEOT SPORT ENGINEERED concept has a range of up to 30 miles when switched to zero emission mode and CO2 emissions of 49g/km on the WLTP test protocols.

Adding to the new model’s sporty style, the body of the 508 PEUGEOT SPORT ENGINEERED is sculpted to increase aerodynamic efficiency. With a sharp front bumper and grille with floating blades and side skirts with styling detail to improve airflow. The concept model features a stylish streamlined look enhanced by a colour-changing ‘Selenium Grey’ coating. 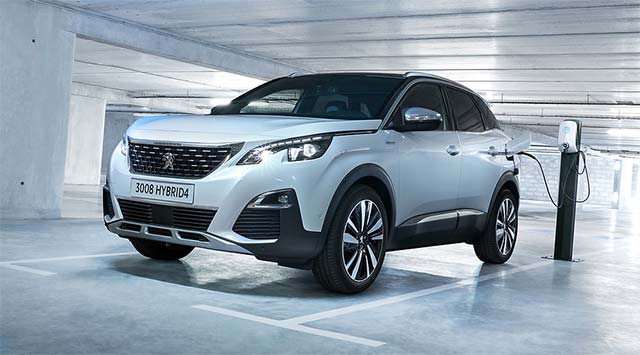 PLUG-IN HYBRID RANGE
A new range of Plug-in Hybrid petrol engines will be on show at Geneva and will be an integral part of PEUGEOT’s transition towards electrification. Announced in 2018, the new range will include the PEUGEOT 3008 SUV HYBRID4, all-new PEUGEOT 508 HYBRID and all-new PEUGEOT 508 SW HYBRID.

The high voltage Lithium-ion (300V) battery, which powers PEUGEOT’s HYBRID and HYBRID4 engines has a capacity between 11.8kWh and 13.2kWh, allowing the cars to drive up to 30 miles on a single electric charge.

The all-new HYBRID4 system will be fitted in the PEUGEOT 3008 SUV. The powerful engine provides four-wheel drive with an 110hp/80kW inverter and reaches the equivalent of 300hp/220kW. This is helped by a combination of a PureTech engine reaching 200hp/147kW and two electric motors (one at the front and the second at the rear) each reaching 110hp/80kW to achieve 0 to 62mph in 6.5s. The battery capacity is 13.2kWh for a zero emission range of 30 miles under WLTP testing. 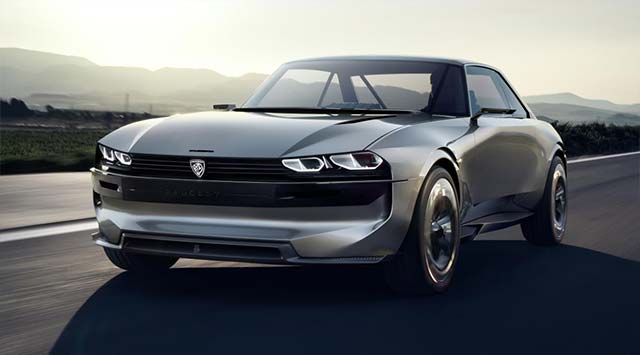 The PEUGEOT e-LEGEND CONCEPT is powered by a 100% electric powertrain, with a 100 kWh battery. Its electric motor reaches 340 kW power, distributed to the four-wheel drive. This power allows the PEUGEOT e-LEGEND to go from 0 – 62mph in less than 4 seconds, reach a maximum speed of 136mph, and a range of 600km (372 miles) from full charge.

With a 100% electric engine and a battery built into the frame, the Electric VTC eT01 Belt Powertube makes for a practical and efficient cycle, made easier with a zero-maintenance belt drive made out of carbon fibre.

The PEUGEOT E-METROPOLIS concept is an electric variant of the popular three-wheeled PEUGEOT METROPOLIS scooter. With an electric motor delivering a maximum power of 36 kW to the rear wheel, the new concept model is able to reach top speeds of 83mph, with a range of up to 124 miles from a full charge. 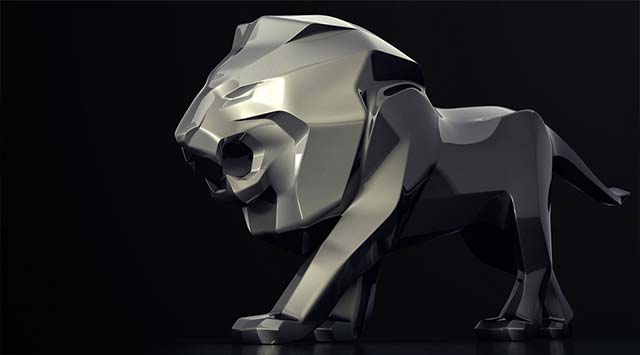 PEUGEOT LION
Returning to Geneva will be the iconic brand emblem, the PEUGEOT Lion. In keeping with the theme of PEUGEOT’s work presented at Geneva, the revamped Lion will come to life electrified in Dichroic green and blue, with dynamic reflections on its sculpted surfaces.

Created by the PEUGEOT Design Lab to mark the 160th anniversary of the PEUGEOT emblem in 2018, the green and blue gleam of the new design will be a central styling cue for upcoming models in PEUGEOT’s electric transition.

David Peel, Managing Director of PEUGEOT UK said: “The 2019 Geneva Motor Show is set to be the biggest one yet for PEUGEOT. With a full electric range set to arrive by 2023, this is our first chance to show off the progress we have made towards electrification so far, and give a glimpse of what motorists can expect in the future.

“We have released some great work on our road towards an electric future through the PEUGEOT e-LEGEND CONCEPT. With the all-new PEUGEOT e-208 we are showing the world how we can adapt our current range for everyday use in an EV future, and how as a brand we are moving with the times and evolving in sync with the wider motoring industry.”

Tying in with PEUGEOT’s #UnboringTheFuture ambitions, PEUGEOT’s electrified appearance at the 2019 Geneva Motor Show will fall under the new ‘MOTION & e-MOTION’ signature representing the brand’s mission to focus on electrifying its full range over the next five years.

Check out our complete coverage on the Geneva Motor Show.