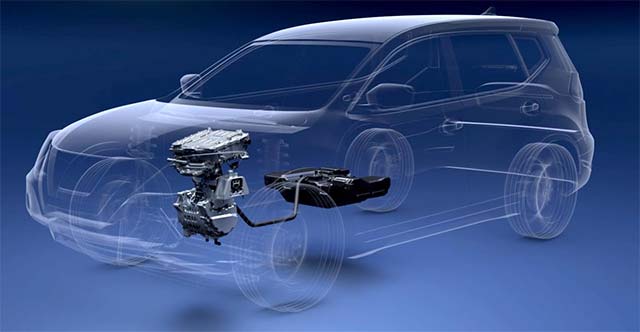 Nissan unveiled the IMQ concept crossover, equipped with its award-winning e-POWER system, and announced it will launch the electrified powertrain technology in Europe.

e-POWER has been a hit with consumers in Japan, where it’s helped make the Nissan Note the country’s best-selling registered car. Combining 100% electric motor drive with a gasoline engine that charges the battery, e-POWER cars give customers instant, smooth acceleration and excellent fuel efficiency.

Introducing the technology in Europe will reinforce Nissan’s leadership in electrified vehicles in the region, where the Nissan LEAF is already the best-selling electric car.

Building on the success of LEAF, e-POWER will be among a suite of new technologies coming to Nissan’s best-selling vehicles in Europe in the coming three years. By 2022 sales of electrified Nissan vehicles will increase five-fold, and by the end of that year will be double the market average.

“Already Nissan is the world’s leader in mass-market EV technologies and a fully electrified Europe is now within our sights,” said Roel de Vries, Corporate Vice President for Nissan Motor Company. “With e-POWER arriving on European roads within the next two years, we will bring the benefits of Nissan Intelligent Mobility to more customers and keep moving people to a better world.”

The IMQ, unveiled at the Geneva Motor Show, is an advanced technology and design showcase equipped with an all-wheel-drive version of e-POWER. It reflects Nissan’s position as a leader in crossovers, with a look that pushes the boundaries of what a European compact crossover can be.

The e-POWER system includes a gasoline engine with a power generator, an inverter, a battery and an electric motor. Used solely to charge the high-output battery, the gasoline engine always runs at an optimal speed. This leads to superior fuel efficiency and lower emissions compared with a traditional internal combustion engine.

Currently, e-POWER is available in the Note and Serena models in Japan. More than 70% of Note sales and almost half of Serena sales in the country are e-POWER versions.

Nissan’s leadership in electrified cars is underscored by the news announced today that the 100% electric Nissan LEAF has reached total global sales of 400,000 vehicles – cementing its position as the world’s best-selling electric car. Starting tomorrow (March 6), the Nissan LEAF e+, featuring a new and larger battery, will be available for customer orders on Nissan’s European consumer websites.

More than 3,000 customers have already ordered the 62-kilowatt-hour LEAF just a month after its global launch.

Nissan Energy has also taken center stage. Later this year, the Nissan Energy ROAM, a portable, weatherproof power pack will be introduced. The ROAM will use cells from previously-used LEAF batteries and provide a storage capacity of 700 watt-hours and a power output of 1 kilowatt.