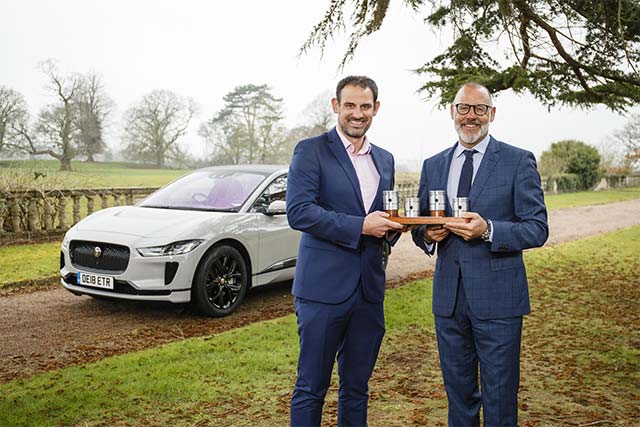 The Jaguar I-PACE has emerged victorious at the UK Car of the Year Awards 2019, after a closely fought battle with three other manufacturers. Having been named the Best Executive car when the category winners were announced in February, the Jaguar was pitted against the 11 other triumphant new cars to fight it out for the top honour.

It is the third time in six years of the UK Car of the Year Awards that the overall victor has been battery-powered.

“As manufacturers take electric vehicles more seriously, Jaguar is leading the pack with I-PACE, which offers fantastic range and performance as well as a stylish and spacious interior for driver and passengers,” commented John Challen, director of the UK Car of the Year Awards. “The UK Car of the Year Awards judges are always keen to recognise innovation and that is certainly the case in 2019.”

Collecting the UK Car of the Year Awards 2019 trophy, Rawdon Glover, Jaguar Land Rover MD, said: “This latest major award for I-PACE is something we can all be extremely proud of. This car was conceived, designed and engineered in Britain, so to have a selection of the nation’s leading automotive journalists vote it as the overall UK Car of the Year against some stiff competition is a special moment for us.”

Judge Guy Bird commented: “Jaguar’s I-PACE really is miles ahead of the premium EV pack, designed and engineered without compromise for an electric future. Combining real sports car performance, a good range, SUV skills and a huge – and hugely impressive – passenger cabin; it’s hard to fault.” Freelance journalist David Motton proclaimed the Jaguar to be, “the most enjoyable EV to drive bar none”, highlighting the car’s performance and real-world range. “It’s not just a great EV, it’s a great SUV, full stop,” he concluded.

In the closing stages of the voting process, it was too close to call between the Jaguar, Alpine’s A110, the Volvo XC40 and the Suzuki Jimny. When all the votes were in, the I-PACE triumphed by two points from the Alpine, with Volvo taking third place.

Launched in 2014, the UK Car of the Year Awards are judged by 29 of Britain’s leading motoring journalists. Each judge uses their expertise to pick out the top performer in 12 vehicle categories, before deciding the overall winner from their favourites in each class. To help them decide the winner, judges were invited to Caffeine & Machine, the motor enthusiasts’ roadhouse in Ettington, near Stratford-upon-Avon and the base for the UK Car of the Year Awards 2019 driving day. The event proved a fantastic opportunity for them to drive the winning models back-to-back before casting their final vote.

For more information about the UK Car of the Year Awards, go to ukcoty.co.uk