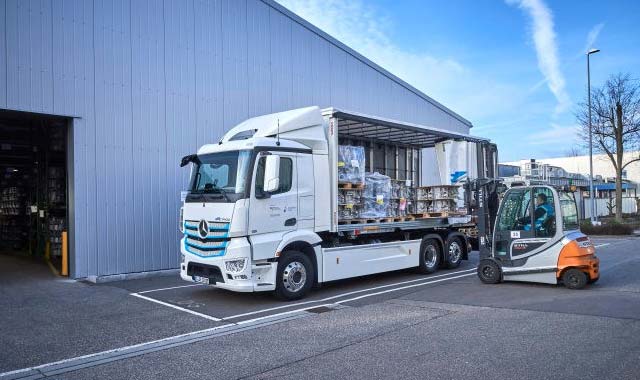 With the fully electric eActros truck, Mercedes-Benz Trucks demonstrates that it is already possible today to complete heavy distribution tasks locally emission-free and quietly in the Murg valley in Southern Germany. The official handover of the eActros to regionally based logistics company Logistik Schmitt took place last week on occasion of Daimler Trucks’ annual press conference held at the Unimog-Museum in Gaggenau.

As part of the eWayBW project, commercial transport will be electric on the B462 federal road around Rastatt with the test operation of catenary trucks as of 2020. Whilst preparations for the construction of the necessary infrastructure are still ongoing, the eActros is mobile with its battery-electric drive, fully flexible and in need of only minimal infrastructure; nothing more than a charging station.

From spring of this year, Logistik Schmitt will be operating the eActros in place of a conventional diesel truck as part of a field test transporting transmission housings. The eActros will be tested on an around 7 kilometres stretch in a demanding three-shift system between Logistik Schmitt’s warehouse in Ötigheim and Rastatt’s Mercedes-Benz Gaggenau plant. The daily tour of the 25-tonne truck totals around 168 kilometres.

This represents the kick-off to a series of eActros field tests taking place over several years in the Murg valley and the surrounding region. As a next step, comparative tests with the catenary project will be carried out with an advanced version of the eActros as a semitrailer tractor variant with higher tonnage and range.

In the first phase of the eActros test operation, Logistik Schmitt is integrating a vehicle with a swap body into the company fleet. The eActros transports up to twelve tonnes and drives twelve tours a day. The batteries in the eActros are charged also whilst the vehicle is being loaded or unloaded so that the total 200-kilometre range of the eActros can be optimally used. Initially the vehicle will be charged using a mobile charging station.

As of the second phase of the eActros project in the Murg valley, the 25-tonne truck from the first phase will be replaced by an advanced version of the electric truck in form of a semitrailer tractor unit. Using the eActros semitrailer, Logistik Schmitt will deliver axle components along the 14 kilometres from the warehouse in Ötigheim to the Mercedes-Benz Gaggenau plant – mainly via the B462. This route is, for the most part, the same as that for the catenary project. The specifications of the eActros semitrailer truck will be comparable to those of the overhead catenary trucks, among other things in terms of the higher tonnage and range. This parallel testing of the eActros and the catenary trucks will take place for approximately one year and will deliver the most important data and findings necessary for comparing both concepts, e.g. in what way the vehicles are suitable for this operation.

During the third phase of the project, which is expected to take place within the second phase, the eActros semitrailer truck will travel the exact catenary truck route for approximately one to two weeks so that a direct comparison can be made. This will serve to validate the second phase. During this direct comparison, the eActros will transport rolls of paper the 18 kilometres from the paper mills in Gernsbach-Obertsrot to the Fahrner logistics site in Kuppenheim – just like the trucks involved in the overhead-lines project.

The eActros: architecture based entirely on electric drive

The eActros is based on the frame of the Mercedes-Benz Actros. Beyond that, the eActros uses an architecture based entirely on electric drive with a large proportion of specific parts. The drive comes from two electric motors near the wheel hubs on the rear axle. Their output is 126 kW each, and the maximum torque is 485 Nm each. Downstream of the transmission that equates to 11,000 Nm each. The driving output is therefore on a level with a diesel truck. The maximal permitted axle load is the usual 11.5 tonnes. The energy is stored in lithium-ion batteries with a capacity of 240 kWh. Depending on the available charging capacity, a full charge takes between two and eleven hours (at 150 or 20 kW respectively).

Daimler has had experience of working with electric trucks since 2010 and its first fully electric series production truck has been on the market and used by customers since 2017: the light-duty Fuso eCanter truck. At the end of 2018, Daimler Trucks handed over the first medium-duty truck, a Freightliner eM2 to a customer and thus began practical tests in the USA for heavy and medium-duty electric trucks. The eCascadia for heavy-duty distribution is also to be tested. In the bus sector, delivery of the first Mercedes-Benz eCitaro took place at the end of the last year and the buses are in test operation with real customers. The Thomas Built Buses brand is launching the eC2 (also known as Jouley) in a small series. The first vehicles will be handed over to customers in 2019. With regard to vans, the Mercedes-Benz Vans eVito recently became available and has already been delivered to its first customers. In the second half of 2019 the eSprinter will follow. The vehicles from Daimler Trucks, Daimler Buses and Mercedes-Benz Vans will thus cover the entire range of urban traffic with electric vehicles.