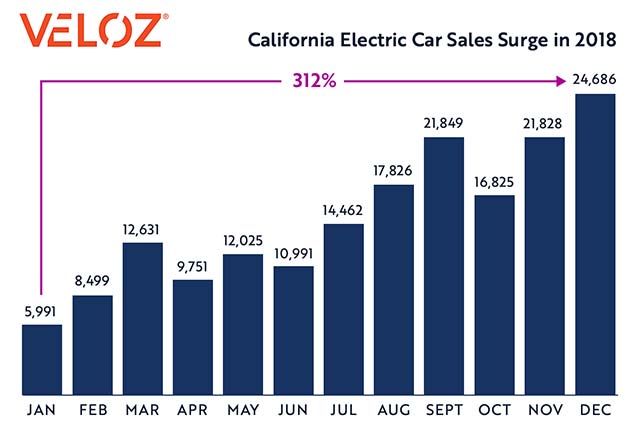 According to tracking by Veloz—a non-profit organization focused on accelerating the transition to electric vehicles—Californians are buying electric cars at a sharper rate of increase, with year-over-year increases in sales for all twelve months in 2018, total electric car sales increasing 84% from 2017 to 2018, and, comparing the start and end of 2018, the state saw a 312% increase in sales.

“‘Electric For All’ is becoming a reality,” said Josh Boone, executive director of Veloz. “As electric SUVs and trucks break into the market in the coming years, everyone will be able to discover a better way to drive, no matter your lifestyle, hobby or occupation. If this growth continues, 2019 will be another record breaking year.”

– There were 100% higher electric car sales in California in December 2018 compared to December 2017.

– A notable win for the year includes California selling its 500,000th electric car in November (total sales hit 512,717 at the end of month). 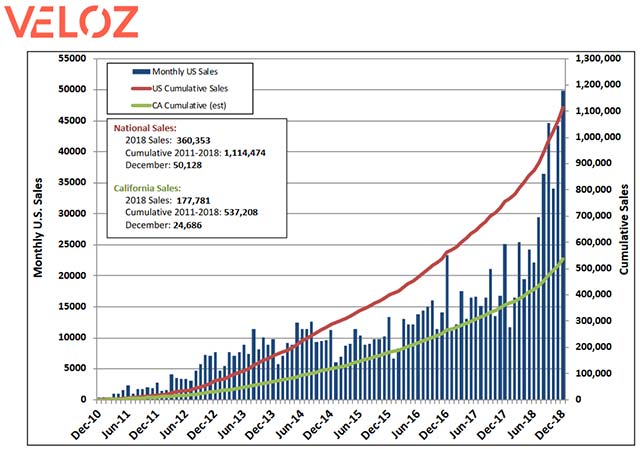 More electric cars choices and more electric cars on the road leaves a question about charging infrastructure, said Veloz. A report found that California will need as many as 279,000 chargers by 2025 to support modest growth of electric car adoption.

Veloz recognizes that while electric car sales are increasing, uptake is not happening fast enough to achieve the state’s emissions and electric car sales goals. To boost interest and awareness, Veloz launched the public awareness campaign “Electric For All” to educate and inspire Californians to drive electric.