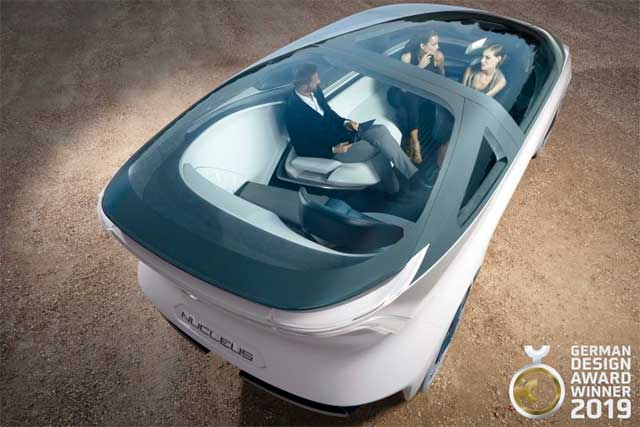 The German Design Award is one of the most renowned design competitions worldwide and enjoys an excellent reputation far beyond circles of experts. Those who beat out the high-calibre competitors have successfully proven that they are among the best.

“The innovative vision and design of the Nucleus had already gained the consensus of the public and the media. Now with this double recognition, moreover, from a so prestigious German institution, the Nucleus receives a further appreciation from the critics. The measure of the success of those who do make design lies in the ability to set trends, to inspire others and even to be imitated. Icona will continue to explore the ways of mobility and artificial intelligence and to amaze” Teresio Gigi Gaudio, President & CEO of Icona, said.

Nucleus represents the synthesis of futurism and a human-centered mindset. It takes the Icona Neo Concept one step further by reconsidering the very way that we use a vehicle. Neo introduced us to tomorrow, Nucleus will introduce us to after-tomorrow.

Beyond its technological innovation, Nucleus also shows us the future for the next generation of cars. A generation that aspires to be socially responsible through respect not only for the natural environment but also for the human environment. Mobility in after-tomorrow will be very different from today, with a large number of shared, self-driving, electric vehicles which will serve as individual or small group shuttles between mass mobility infrastructure and large hub destinations.

With its fully autonomous driving level five, the Nucleus jumps two generations ahead. Inside the vehicle, the absence of a driver does not only mean the absence of a steering wheel and a dashboard, but the opportunity for a new understanding of mobile living spaces, where the focus is no longer the road but the destination.

With a completely autonomous driving system, Nucleus has not side windows in the traditional sense, but semi-transparent panels in the same color as the body that allow the occupants to look out, while remaining protected from prying eyes.

The Icona Nucleus Concept will premiere at the coming 2018 LA Auto Show.

Founded in 2010, Icona has its roots in the city of Turin, Italy, where know-how and many globally recognized automotive-related facilities are concentrated, including design studios, manufacturers, universities and research centers. The Icona Group works with more than 130 designers, modelers, engineers, and project managers from 21 different countries, with offices in Shanghai and Los Angeles in addition to the Turin headquarters.