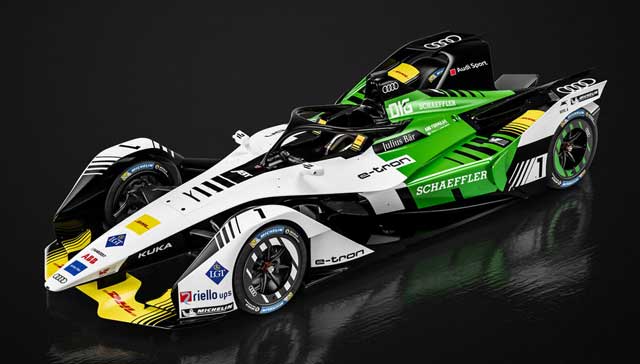 Audi will continue racing with electric power in 2019 after the brand proved its e-expertise right in its first year by winning the teams’ championship. When the new Formula E season starts in Riyadh (Saudi Arabia) on December 15, 2018 Daniel Abt and Lucas di Grassi will battle for titles again in the newly developed Audi e-tron FE05.

Audi is committed to electric mobility – on the road with the new Audi e-tron and on the race track ever since 2014, as well as with its own factory team in Formula E since 2017. For nearly 40 years, the brand has been active in top-caliber racing in order to test new technologies for production. quattro, TFSI, TDI and hybrid are now followed by e-tron. “In Formula E, we demonstrate Vorsprung durch Technik in e-mobility,” says Peter Mertens, Member of the Board of Management, Technical Development, of AUDI AG.

Audi was the first German automobile manufacturer on the Formula E grid in the 2017/2018 season. With four victories and a total of eleven podium finishes Audi Sport ABT Schaeffler won the teams’ championship after twelve races around the globe. The commitment in the fully electric racing series is the electric pillar of Audi’s motorsport activities. Formula E is currently experiencing a boom as a result of additional manufacturers and partners joining the series.

Head of Audi Motorsport Dieter Gass: “By winning the teams’ championship we proved our expertise in e-mobility right in our first year in Formula E. We intend to build on this success and are ready to pit ourselves against the numerous new competitors.”

The new season marks the beginning of a new era in Formula E: For the first time since the series was started in 2014, only one race car per driver will be fielded. The previously required mid-race car swap will cease because the battery capacity is now sufficient to cover the full 45 minutes: another aspect that proves how motorsport – and particularly Formula E – is a driver of innovations and technologies. With the Audi e-tron FE05 Audi has meticulously prepared for the new technical and strategic challenges.

The Audi e-tron FE04 in the season that just ended was Audi’s first fully electric race car. The brand also showcases the e-tron FE04 at the premiere of its first all-electric production model in San Francisco. While in Formula E’s inaugural season in 2014/2015 identical electric race cars were still used, the teams and manufacturers have been allowed to develop the entire powertrain themselves since the 2015/2016 season. It consists of the motor, transmission, parts of the suspension and the related software. Its centerpiece is the combination of the motor and transmission that Audi and its technology partner Schaeffler have jointly developed. The main emphasis of the engineers is on making the motor-generator unit as efficient as possible and to achieve a high level of energy conversion efficiency.

Like in other professional racing series, in-season technical modifications are no longer allowed. Instead, engineers and drivers are primarily challenged to extract the optimum from the existing package and to perfectly adapt the car to the respective city circuit. The software offers the greatest scope for this purpose. In Formula E, it is central especially in terms of energy management. Here, the development of production cars benefits from the experiences in motorsport as well.

Following a final appearance in San Francisco, the championship-winning race car Audi e-tron FE04 will clear the way for its FE05 successor. With a spectacular design that is unique in motorsport the new model has been causing a sensation even months before the season opens, just like initial ideas for a set of revolutionary regulations for the races. In order to provide the drivers and teams with various strategic options after the elimination of the required pit stop, the officials are discussing so-called activation zones. Although located trackside and therefore involving a small detour, they give the driver an extra power boost for his car. This guarantees suspense.

13 races in twelve metropolises are planned for season five. Between the opener in Riyadh and the two final rounds in New York in mid-July 2019, the series will visit Marrakesh, Santiago de Chile, Mexico City, Hong Kong, Sanya, Rome, Paris, Monaco, Berlin and Zurich. Each race will last 45 minutes and not be held on permanent race tracks but on temporary city circuits.

Team Audi Sport ABT Schaeffler is a founding member of Formula E and has been on the grid with Daniel Abt and Lucas di Grassi ever since the inaugural race. The Brazilian clinched the title in the drivers’ championship in season three (2016/2017).