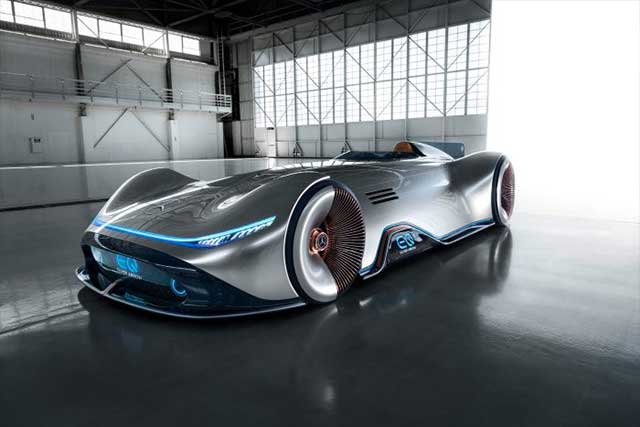 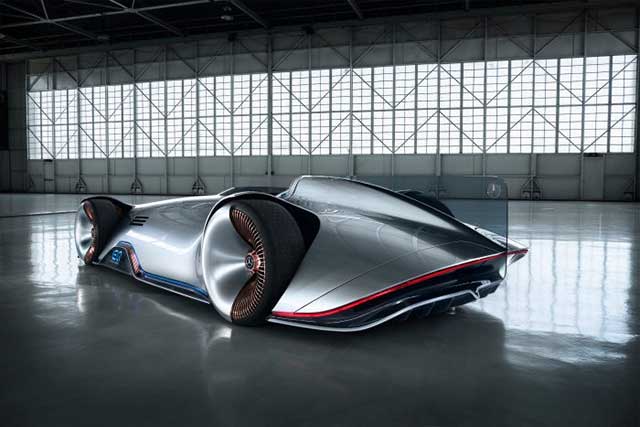 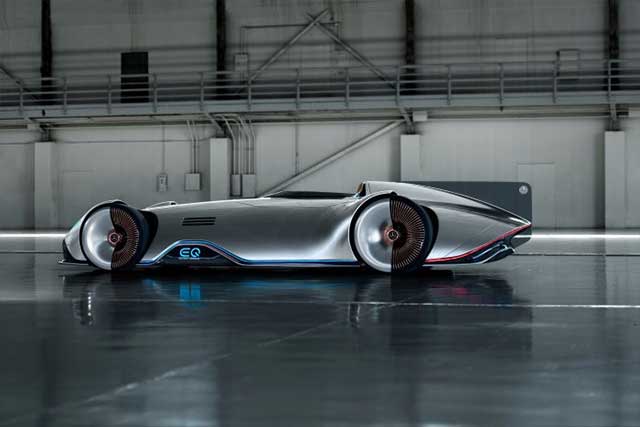 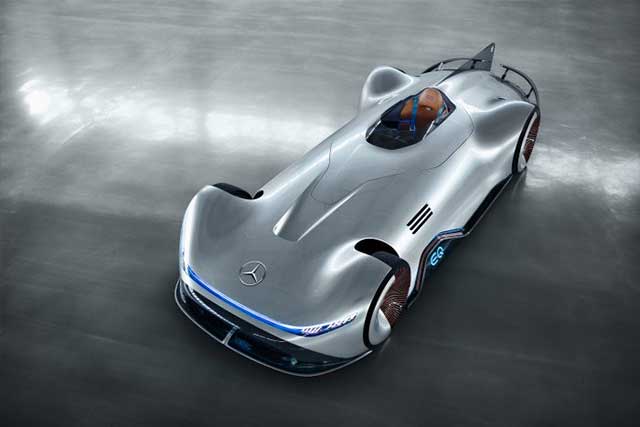 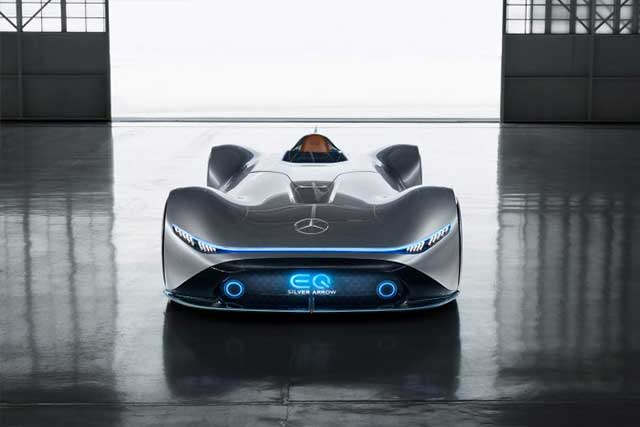 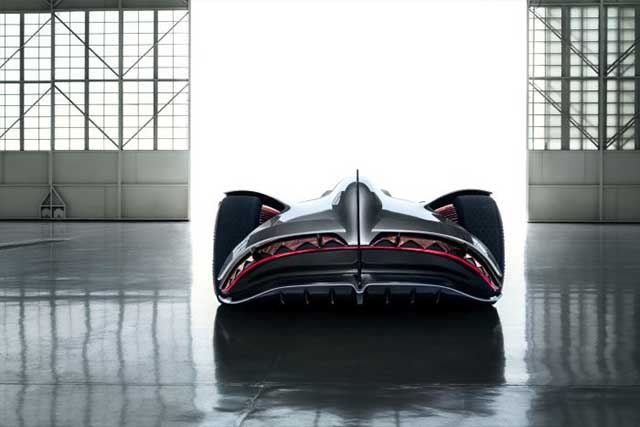 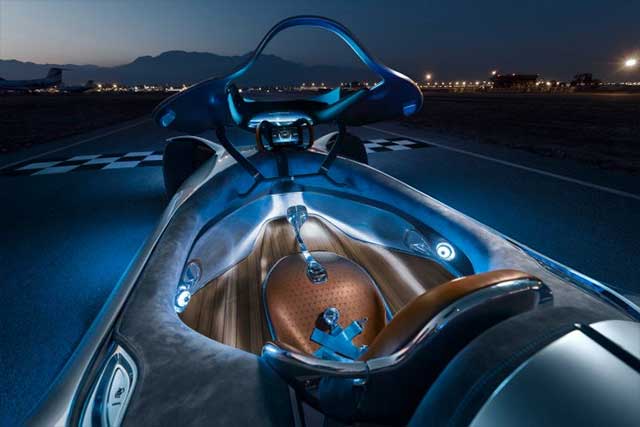 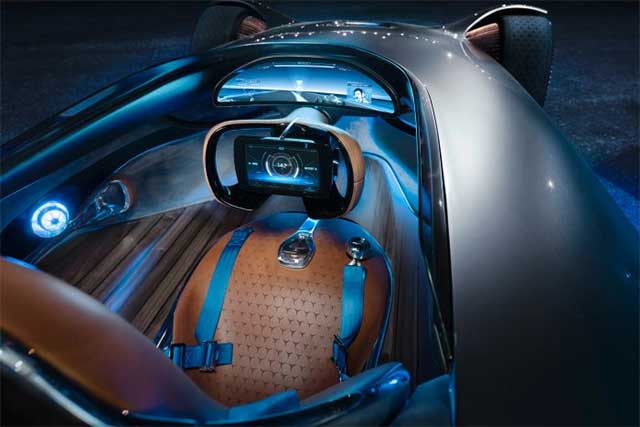 At Pebble Beach in California, Mercedes-Benz is showcasing the Vision EQ Silver Arrow showcar during Monterey Car Week, which is being held from 18 to 26 August 2018.

The event attracts car aficionados and collectors from all over the world. The one-seater vehicle is also an homage to the successful record-breaking W 125 car from 1937. The paintwork in alubeam silver is reminiscent of the historic Silver Arrows which, for weight reasons, did not have a white paint layer.

The interior is dominated by traditional, high-quality materials such as genuine leather, polished aluminium and solid walnut. The digital cockpit, meanwhile, points directly into the future: It includes a curved panoramic screen with back projection, as well as a touchscreen integrated into the steering wheel.

“Over 80 years ago, the historic Silver Arrows demonstrated that Mercedes-Benz was a pioneer when it came to speed thanks, among other things, to their streamlined shape,” says Gorden Wagener, Chief Design Officer at Daimler AG. “The Vision EQ Silver Arrow draws on that legacy. Intended for acceleration and driving pleasure, it embodies progressive luxury and provides an insight into the future of our design. As a result, the show car drives the design idiom of our new EQ product and technology brand to the top.”

The Vision EQ Silver Arrow is conceived as an electric vehicle. This soundless Silver Arrow has an output of 550 kW (750 hp). The thin rechargeable battery in the underbody has a useable capacity of approx. 80 kWh and enables a calculated range of over 400 km according to the WLTP. Side air vents help to cool the battery.

The role model for the Vision EQ Silver Arrow is the W 125 twelve-cylinder, record-breaking car which Mercedes-Benz built in 1937 on the basis of the Grand Prix racing car.

For the new body in 1937, Mercedes-Benz was inspired greatly by the aviation industry: Examples include the recommendation from the development departments of the aircraft factories of Ernst Heinkel and Willy Messerschmitt to shorten the front overhang and to make the front more rounded. The front was also extended further down and ended more steeply at the tip. As desired, this reduced lift on the front axle. A longer and more strongly raised rear reduced lift on the rear axle. One striking feature – and inspiration for the designers of the Vision EQ Silver Arrow – was the round cockpit glazing modelled on a drop of water in terms of outline and cross-section.

With it, Rudolf Caracciola achieved 432.7 km/h on the A5 autobahn between Frankfurt and Darmstadt based on the average speed travelling there and back. This speed record on public roads stood until November 2017.

With its clear, seamless design, the design idiom of the Vision EQ Silver Arrow is a brand-specific embodiment of the design philosophy of Sensual Purity. The streamlined silhouette of the approximately 5.3-metre long and approximately one metre shallow one-seater vehicle is slender yet sensuous.

The show car’s body structure is made of carbon fibre. The multiple layers of paintwork in alubeam silver appear like liquid metal over the top. This concept represents the design polar opposites of “hot” and “cold”. Functional attachment parts made of carbon fibre such as the front splitter epitomise the cool and rational aspect of this philosophy. The same applies to the front trim designed as a display, as well as the continuous lighting strip at the front. The side skirts also feature a lighting strip and the large, recessed EQ lettering in front of the rear wheels is illuminated blue as is characteristic of the brand.

Other highlights include the driver’s cockpit, which can be folded forwards, and the partially free-standing multi-spoke wheels. The non-rotating hub caps and the partial trim on the wheels are other stylish and innovative highlights. The 168 spokes per wheel are made of lightweight aluminium and are painted a rose gold colour as is typical for EQ.

Offering exceptional traction and correspondingly fast acceleration, the Vision EQ Silver Arrow has slick 255/25 R 24 tyres at the front and 305/25 R 26 tyres at the rear. Attesting to the attention to detail, tyre partner Pirelli has helped to realise a star pattern on the tread.

The rear diffuser is reminiscent of motorsport. Two extendible rear spoilers act as an air brake by increasing the wind resistance when deceleration is desired.

Interior: between tradition and modernity

When the driver’s cockpit is folded forwards, it provides a view of the surprisingly wide interior. A contrast brings it to life: On the one hand, it uses traditional, high-quality materials. These include saddle brown genuine leather on the seat and steering wheel, polished aluminium throughout the interior and solid walnut with darker coniferous wood pinstripes on the floor. This creates a bridge back to the historic racing cars of the Silver Arrow era. On the other hand, modern, high-tech solutions such as the large projection surface for the panoramic screen and innovative user experience solutions such as the virtual race option (see below) represent the EQ’s typically visionary character. This contrast is an intentional merging of past and future.

The sitting surface and backrest have an unusual pattern which is aligned with the seat contour: Stars have been stitched in with the help of laser engraving. AIRSCARF neck-level heating is integrated into the seat. A four-point seatbelt inspired by motorsport holds the driver securely in place. The pedals can be adapted to the driver’s specific stature, with a controller located on the seat for adjusting the pedals.

To match the exterior paint finish in alubeam silver, the side walls of the interior are covered in a luxurious, grey suede.

The driver of the Vision EQ Silver Arrow is encompassed by a large panoramic screen on which a 3D image of the surroundings is projected from behind. As a pointer to future possible charging technologies, the lane of the roadway on which inductive charging is possible is superimposed onto the screen.

With the help of artificial intelligence it is possible to engage in a virtual race against historic or present Silver Arrow racing cars. For this a virtual racetrack is superimposed onto the real roadway on the panoramic screen and the driver sees their opponent either ahead of them or behind them as a “ghost”. The Virtual Race Coach assistance function helps you become a better driver by giving instructions during the race.

There is also a touchscreen on the steering wheel. The driver can use it to select programs such as Comfort, Sport and Sport+, which offer different driving characteristics. Sound settings can also be configured here: Choices include the sound of a current Formula 1 Silver Arrow or a Mercedes-AMG V8 engine.

The EQ concept vehicles: outlook for electric cars in all segments

With the Concept EQA, Mercedes-Benz demonstrated how the EQ strategy can be translated to the compact class at the 2017 Frankfurt Motor Show. Featuring one electric motor on the front axle and one at the rear, this electric athlete has a system output of over 200 kW. The drive characteristics can be altered by varying the permanent all-wheel drive’s front to rear torque distribution. The Concept EQA shows which drive program has been selected on a unique virtual radiator grille.

At the 2017 Frankfurt Motor Show, smart presented the smart vision EQ fortwo – an electric and autonomous vision for highly efficient and flexible local public transport. Autonomous and electric-powered, the smart vision EQ presents a consistent concept for the future of urban mobility and the future of car sharing. The vehicle picks up its passengers directly from their chosen location and has no steering wheel or pedals.

The Concept EQ, unveiled at the 2016 Paris Motor Show, heralded the new EQ product and technology brand – a concept vehicle with the looks of a sporty SUV coupé that pre-empted many elements of the Mercedes-Benz EQC, which comes onto the market in 2019.