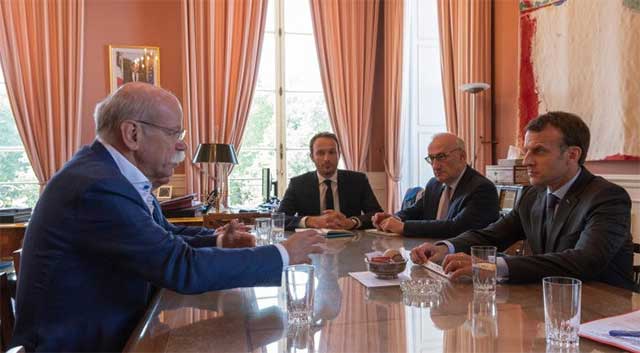 Mercedes-Benz Cars is expanding its capacities for electric cars in Europe. Daimler will invest 500 million euros ($589 million) into its plant in Hambach, France, to start producing a compact electric car of the new product and technology brand EQ.

The new EQ electric model will be built alongside battery-powered version of the Smart fortwo.

“20 years ago we started an exemplary German-Franco project with the production of the smart in Hambach. Now we take the next step and for the first time in our more than 100-year old history we bring the production of Mercedes-Benz to France. With the compact EQ model from Hambach we continue our electric initiative,” says Dr. Dieter Zetsche, Chairman of the Board of Management of Daimler AG and Head of Mercedes-Benz Cars after a meeting with the French President Emmanuel Macron at the Élisée Palace in Paris.

Mercedes-Benz Cars plans to launch more than ten electric cars by 2022: throughout all segments, from smart to large SUVs. The company assumes that unit sales of electric models will represent a share of somewhere between 15 and 25 percent of total Mercedes-Benz sales by 2025. From 2020, the brand smart will only offer electric vehicles. Thereby, smart will be the first automotive brand of the world, which completely changes from combustion engines to electric drives.

With the smart location in Hambach, Mercedes-Benz Cars has a longstanding competence centre for the production of electric vehicles: Already in 2007 smart launched a battery-powered vehicle as a pioneer in e-mobility and has been producing electric smarts in series since 2012.

The production network of the new generation of compact cars includes the plant in Kecskemét, Hungary, the BBAC production site in Beijing, the COMPAS plant in Aguascalientes (Mexico) as well as the Finnish manufacturing service provider Valmet Automotive.

The preparations for the new model in Hambach will start shortly. The investment of around 500 million euros will be spend for the construction of new facilities and also flow in the product itself: With state-of-the-art technology a new body shop and surface treatment will be build. The plant will also expand the assembly facilities and reshape the site’s infrastructure.

– Currently, electric hubs for the production of electric vehicles and batteries are being built around the globe.

– By 2022, Daimler will electrify the entire portfolio of Mercedes-Benz, offering customers at least one electrified alternative in all segments. To that, Mercedes-Benz will continue to further promote the development of plug-in hybrids and the introduction of 48-volt systems. Out of more than 130 electrified vehicles, more than ten will be fully electric passenger cars – throughout all segments, from the smart to the large SUV.

– With the smart EQ fortwo and the smart EQ fortwo cabrio the smart plant Hambach is producing the fourth generation of electric vehicles of the small city car since 2017. The first Mercedes-Benz electric vehicle of the new product and technology brand EQ will roll off the assembly line at the Mercedes-Benz Bremen plant. Production of the EQC, a fully-electric SUV, will start in 2019. Shortly after, the EQC will also be produced at BBAC, the joint venture of Daimler and BAIC. Further locations for future EQ models of Mercedes-Benz are the Mercedes-Benz plants Rastatt (Germany), Sindelfingen (Germany), Tuscaloosa (USA).