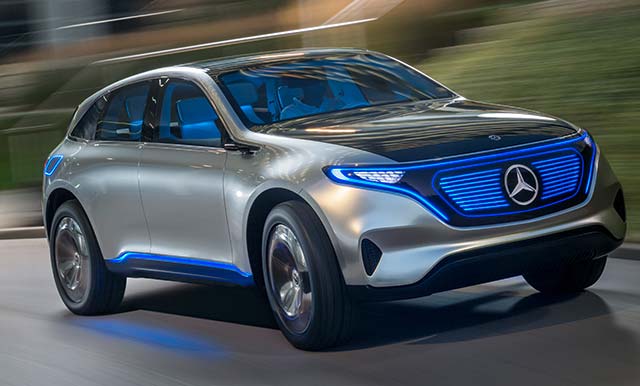 The decision is based on a declaration of intent, which the company has set up with the works council. Now, together with the sites in Bremen and Sindelfingen, all three German Mercedes-Benz car plants will produce electric vehicles of the product and technology brand EQ.

“Our Mercedes-Benz car plants in Germany play a decisive role in electric mobility. They are centres of competence for the production of EVs in the global production network of Mercedes-Benz Cars. Thanks to highly flexible structures, we are able to integrate electric vehicles in the regular series production in our plants. At the same time, we are increasing our competitiveness with the efficient integration of Industry 4.0 applications. This allows us to benefit from the opportunities of electric mobility, while considerably reducing the required investment,” says Markus Schäfer, Member of the Divisional Board of Mercedes-Benz Cars, Production and Supply Chain.

Future EQ models can be integrated in the series production of existing Mercedes-Benz plants on four continents. Already today, thanks to highly flexible structures, our plants can produce vehicles with different drive types on the same line. Which foreign locations will produce further EQ models within the production network will be decided on the basis of market demand.

The Mercedes-Benz plant in Rastatt is the lead plant in the global production compound for compact cars. Already in 2015, the plant management and works council reached an agreement for competitiveness and future development – the so called future plan and agreed to produce the next Mercedes-Benz compact car generation in Rastatt.

“With the new declaration of intent, we are shaping our future, thereby creating good prospects for our workforce in the coming age of electric mobility. The Mercedes-Benz plant in Rastatt will be the centre of competence for the production of new compact EQ models. In the year of our 25th anniversary, this is great news for our highly motivated workforce,” says Thomas Geier, Site Manager Mercedes-Benz Rastatt plant.

With the Concept EQ, Mercedes-Benz Cars is presenting a new generation of electric vehicles. More than ten new electric passenger cars are scheduled to be launched by 2022: in all segments from smart to large SUVs. Ten billion euros will be invested in the expansion of the electric fleet in the next few years. The new electric vehicles will be produced within the global, highly flexible and efficient production network of Mercedes-Benz Cars with plants on four continents.

The first EQ series model – the EQC – will roll off the line at the Mercedes-Benz plant in Bremen in the year 2019. In addition to that, luxury-class EQ models will be produced at the plant in Sindelfingen. The company assumes that the proportion of electric vehicles in the total unit sales of Mercedes-Benz will be between 15 and 25 percent by 2025. In addition to traction batteries, ACCUMOTIVE will produce batteries for Mercedes-Benz energy storage units and 48-volt-systems. The pioneering 48-volt on-board power supply is celebrating its premiere in the new generation of the S-Class and will be gradually introduced in various model series.

CASE as the basis

CASE – these letters will shape the future of Mercedes-Benz Cars. They stand for the strategic pillars of connectivity (Connected), autonomous driving (Autonomous), flexible use (Shared & Services) and electric drive systems (Electric), which will be intelligently combined by the company. Already today, Mercedes-Benz Cars plays a leading role in all four areas. All activities in the area of connectivity are focused on the digital brand Mercedes me, which gives customers access to an extensive and personalized range of services by app, website or straight from their car.

On the way to autonomous driving, Mercedes Benz has for years been a key driver of development and has repeatedly set the benchmark. To this end, the Mercedes engineers use so-called sensor fusion. The data from different sensors, such as cameras, ultrasound and radar, are intelligently combined and analysed. With car2go the inventor of the automobile is also a pioneer when it comes to sharing. With around two million users, the company is today the world’s biggest provider of free-floating car-sharing. As far as the electrification of the powertrain is concerned, Mercedes Benz is pursuing an integrated approach.

Under the EQ brand, it is developing an ecosystem including not just the actual vehicle, but also a comprehensive offer around electric mobility. This extends from intelligent services to energy storage units for private and commercial customers as well as charging technologies, such as inductive charging, to sustainable recycling. To enable all four pillars to develop its full effectiveness, the relevant activities are being brought together in an independent entity.