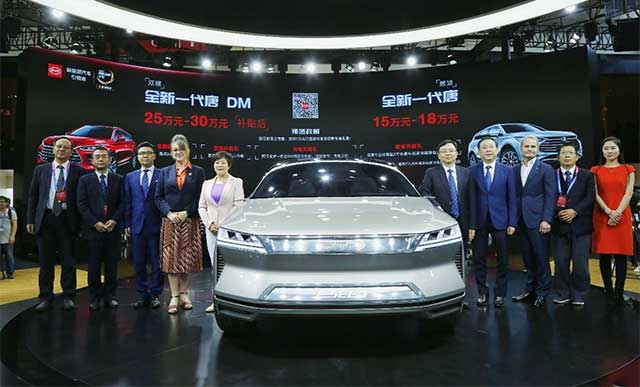 At the recently concluded Beijing Auto show, electrified vehicles have once again become the highlight of the auto industry. BYD provided an excellent and influential exhibition at the Beijing Auto Show with the new generation of Tang, Qin Pro, the all-new concept car E-SEED, and the Song MAX DM, along with other models.

BYD has attained several achievements not only in updating car models, but also in promoting revolutionary technologies for the whole industry. BYD Chairman Wang Chuanfu announced that BYD would launch an innovative E-Platform and DiLink Intelligent Network System at this auto show, which would completely reshape the layout of industry and the mobility of people in the future.

The all new E-platform due to be launched by BYD, is its brand new BEV (Battery Electric Vehicle) platform, which comes with exclusive features of independent innovation, high integration and exceptional performance.

Speaking about the brand new E-platform, Wang said: “The auto industry has been witnessing an unprecedented revolution, adopting the trends of internationalisation, electrification and intelligent network that are gradually turning into reality.” BYD is the global trailblazer in launching innovative E-platform and DiLink. As an advocate and promoter of the revolutionary automotive electrification, BYD will share its technological innovation with major players in the auto industry globally, in order to accelerate the industrialization of electric vehicles, and jointly boost the auto electrification process.

At present, the market of electrified vehicles in China has shown steady potential for further development. In order to further accelerate the growth of new energy vehicles, the Chinese government has also introduced a series of policies that are proving beneficial for the development of new energy vehicles. For instance, the implementation of the Measures for the Parallel Administration of the Average Fuel Consumption and New Energy Vehicle Credits of Passenger Vehicle Enterprises and the construction of 600,000 charging poles by the National Energy Administration in 2018, will further improve the supportive facilities, which are undoubtedly conducive to BYD’s development.

As the most powerful brand of new energy vehicles in China, BYD has worked out an all-new development strategy integrated with internationalization, electrification, and intelligent network, in order to gain a solid foothold in the ongoing auto revolution. On the basis of this strategic vision, BYD launched the new generation of Tang, the debuted Qin Pro and the BEV concept car E-SEED at the Beijing auto show. Compared with previous BYD models, the new generation cars are more in accordance with the international aesthetic. Notably, Dieter Zetsche, the CEO of Daimler, also visited BYD booth at the show, and gave affirmative compliment on BYD’s latest Dragon Face design.

In addition to the new E-platform in terms of electrification, BYD will also launch the “DiLink Intelligent Network System” in the field of intelligence, aiming to provide a multi-dimensional open platform for global developers. Different from the industrial convention, BYD will open not only the In-Vehicle Information system, but also almost all the auto sensors, amounting to 341 sensors and 66 controls. A common mobile phone has only 10 sensors, yet it can generate tens of millions of applications. While the 341 automotive sensors will open through the BYD DiLink intelligent network system, from which a “super car ecological cycle” will be derived. This will help in updating BYD’s auto intelligent networking.

For the entire global automotive industry, DiLink intelligent network system is regarded as the first large-scale opening of the auto system. This will open unprecedented avenues for global developers to launch diverse innovations, which will affect the entire transport industry in a far-reaching way. In addition, BYD’s customized automotive platform for the autonomous driving community will also accelerate the development of the auto-driving industry. The introduction of DiLink intelligent network system reflects Wang Chuanfu’s extraordinary charisma.

The BYD headquarter is located at the Guangdong-Hong Kong-Macao Greater Bay Area, which is also known as China’s Silicon Valley. Thus, the found of BYD is endowed with multiple characteristics of Silicon Valley, such as innovative, forward-looking, open, and technology-oriented. As a microcosm of the development of China’s auto industry, BYD is growing rapidly, and it has bagged the global sales championship for new energy vehicles during 2015-2017 and China’s new energy vehicle sales championship during 2014-2017. Compared with the development of other international automobile enterprises for the same period, BYD’s progress is faster and more stable, which is increasingly favored by consumers worldwide. Marching ahead with the current trend of the global auto industrial revolution, BYD has completed its layout of electrification, intellectualization, and industrial upgrading. It is believed that BYD will soon become a strong competitor to its rivals at the global market.