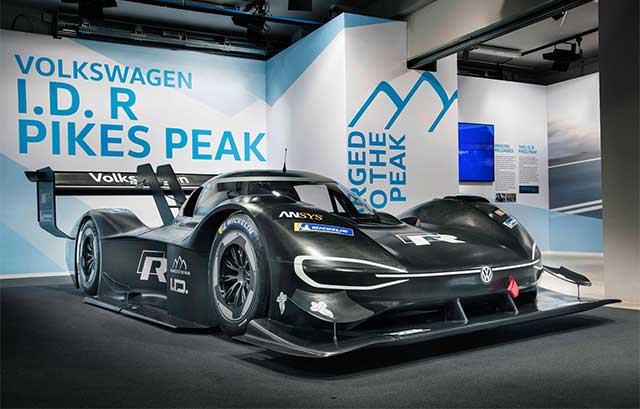 Ushering in a new era of Volkswagen motorsport, the brand unveiled its fully-electric supercar—the I.D. R Pikes Peak—in Alès, France. The supercar will compete in the Pikes Peak International Hill climb in Colorado Springs, CO, on June 24, seeking to beat the existing electric car record of 8:57.118 minutes in the annual “Race to the Clouds.”

“Volkswagen’s goal is to reach the pinnacle of electromobility with the I.D. family,” said Dr. Frank Welsch, Volkswagen Member of the Board of Management with responsibility for Development. “The hill climb on Pikes Peak will definitely be a real acid test for the electric drive. Customers have always benefitted from the findings made in motorsport, and we expect to take these findings and use them as a valuable impetus for the development of future I.D. models.” 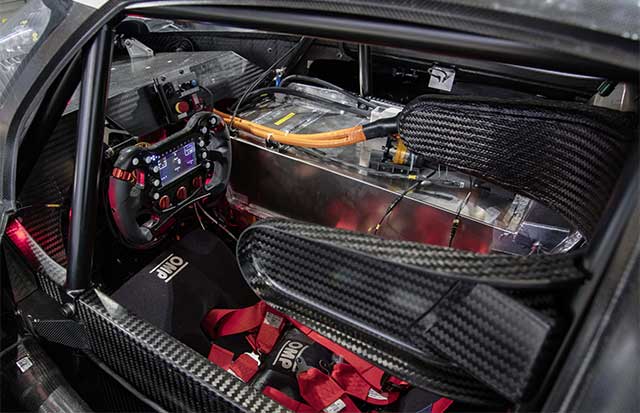 The top goal when developing the Volkswagen I.D. R Pikes Peak was not on maximum performance, as is usually the case with racing cars, but rather to find the ideal balance between energy capacity and weight. Volkswagen’s prototype for Pikes Peak justifiably bears two quality seals in its name. The “R”, which is synonymous with performance cars, and the “I.D.”, the symbol of Volkswagen’s smart E-technology.

As with the sensational twin-engine Golf that took on the Pikes Peak challenge in 1985, 1986 and 1987, the engineers have opted for a solution with two power units. The I.D. R Pikes Peak features two electric engines, generating a system capacity of 680 hp.

Lithium-ion batteries are used as the energy storage system, similar to production EVs, as their power density is the crucial factor for the system when producing high voltage. Roughly 20 percent of the electric energy required is generated during the drive, so the key here is energy recovery. When braking, the electric engines act as generators, converting some of the braking energy into electricity and feeding this into the battery.

Volkswagen’s Pikes Peak program enters a crucial phase with the unveiling of the car in Alès. As testing on the 12.42-mile route of the hill climb in Colorado Springs is very limited, and only possible on certain sections, the bulk of the testing is not done on the actual route, but at racetracks. With the vehicle revealed to the world, testing can commence.

World-class driver and defending Pikes Peak champion, Romain Dumas, will be at the wheel of the Volkswagen I.D. R Pikes Peak for the attempt to break the existing record for electric cars. The 39-year-old Frenchman loves this kind of challenge—as well as three victories at Pikes Peak, he has also won the 24 Hours of Le Mans twice. Incidentally, Dumas, who names motorsport legend Jacky Ickx as his idol, was born in Alès.

On June 24th, the Race to the Clouds involves a 4,720 vertical-foot climb, 156 corners, and just one single attempt. Not only must the technology and driver be on top form as they attempt to set a new record, but the external conditions must be perfect. It is not unheard of for finish-line temperatures at the 14,115-foot summit of Pikes Peak to be below freezing at the end of June.

The Volkswagen brand plans to offer more than 20 fully-electric cars by 2025. Manufacture of the first production model of the I.D. family is scheduled to start at the end of 2019 in Zwickau, Germany