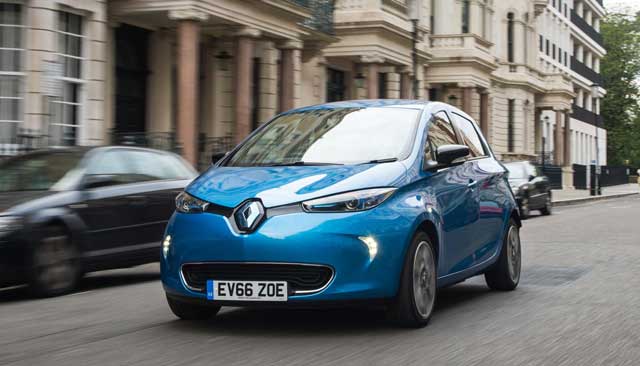 The all-electric Renault ZOE has earned yet another award, this time for new drivers, with judges naming it ‘Best Green Car’ at the inaugural FirstCar Awards 2018.

Hosted by FirstCar at the Royal Automobile Club in London, the awards recognise vehicles that offer excellence for those drivers who are either learning to drive or who have just passed their driving test.

The all-electric Renault ZOE took home the highly-coveted award after impressing FirstCar’s industry experts with its ‘real world’ range, style and value for money. The win underlines its status as an unrivalled choice for those who require an exceptionally efficient compact vehicle that is incredibly easy to live with.

On the judges’ decision, David Motton, Editor, FirstCar Theory and FirstCar Practical said: “With zero tailpipe emissions, the Renault ZOE makes an ideal first car for environmentally conscious drivers. Compared with most plug-in electric vehicles, the ZOE is surprisingly affordable to buy new, and there are now plenty of used examples to choose from. What’s more, the ZOE is easy to drive, has performed extremely well in Euro NCAP safety tests, and the range is a lot further than most new drivers will need to travel each day.”

The Renault ZOE is available in a choice of two trim levels, Dynamique Nav and Signature Nav, both of which come with the new R110 electric motor, combining extra power with driving enjoyment and the Z.E 40 battery that provides a 186-mile real world range. For customers more likely to use public rapid chargers whilst travelling longer distances, the Q90 option is available with both trim levels. This charges the ZOE from 0-80 per cent full in just over an hour when using a 43kW charge point. The MY18 ZOE Q90 with Z.E.40 battery provides an estimated real-world range of 174 miles.

ZOE continues to be available to purchase in two ways. First, under a battery hire scheme, where ZOE pricing starts at £18,240 (OTR) after the Government Plug-in Car Grant, with battery leasing from £59 per month. It is easy to purchase a used ZOE with a battery lease – the new owner simply chooses which leasing option suits their needs the best and starts monthly payments based on their lease plan. You can also buy the ZOE outright. ZOE i ‘full purchase’ models start from £24,020 (OTR) after the Government Plug-in Car Grant, giving the buyer full ownership of the battery with no monthly battery lease payments.

ZOE is the best-selling electric car in Europe and more than 6,000 ZOE have been sold since launching in the UK in 2013. ZOE is one of three models in Renault’s diverse electric vehicle range which also includes the Twizy quadricycle, the Kangoo Van Z.E., Europe’s best selling electric van, and the forthcoming Master Z.E. large panel van.