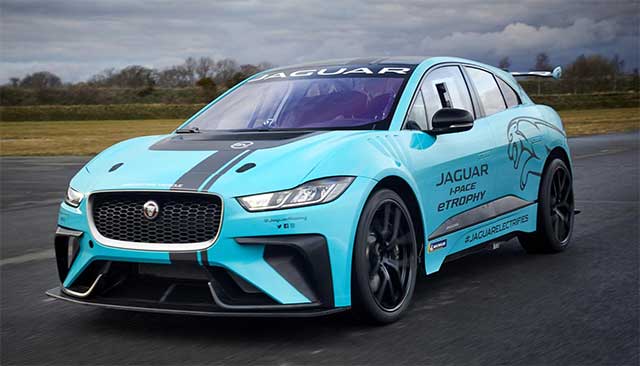 The Jaguar I-PACE eTROPHY racecar will make its global public debut on the streets of Berlin ahead of the ABB FIA Formula E-Prix, as Jaguar leads the charge in the future of battery electric vehicles.

Following the launch of the Jaguar I-PACE in March, Jaguar Racing will mark this historic moment for the new international production based electric vehicle race series with a demonstration lap of the Jaguar I-PACE eTROPHY racecar on Saturday 19 May at the Tempelhof circuit.

The display will take place during the Berlin E-Prix showcasing this exciting racecar to a global audience, and to promote the championship ahead of the season five launch later this year. The driver of the car in Berlin will be announced shortly.

Jaguar Racing have enlisted MS-RT, the race technology division of M-Sport, as technical operations partner for eTROPHY. They will provide on-track engineering and technical resource and deliver the ‘Arrive and Drive’ package for competitors. M-Sport are an experienced and respected automotive company and will become a valued partner to Jaguar Racing. In addition, current partner, Williams Advanced Engineering will support the eTROPHY series in various technical areas including vehicle control systems.

The eTROPHY racecars are based on the Jaguar I-PACE, and up to 20 eTROPHY racecars will line up on the grid in some of the world’s great cities including Hong Kong, Rome, Paris and New York from the start of the 2018/19 series of the ABB FIA Formula E Championship. The full race calendar will be revealed later this year. Further news on eTROPHY teams will be announced shortly.

James Barclay, Team Director Jaguar Racing, said: “We are excited to reveal the new Jaguar I-PACE eTROPHY racecar in Berlin and demonstrate its dynamic capabilities for the first time. The team at Jaguar Racing and Special Vehicle Operations (SVO) are building the key foundations for the incredibly exciting championship and we are pleased with the progress of our test and development programme, which has included a successful tyre test with our partner Michelin.

“We are really happy with the way the championship is progressing, and we are attracting more interest from teams around the world who want to be involved in this pioneering championship. We would also like to welcome M-Sport, who bring a wealth of experience, expertise and professionalism to the team as technical operations partner for the eTROPHY.”