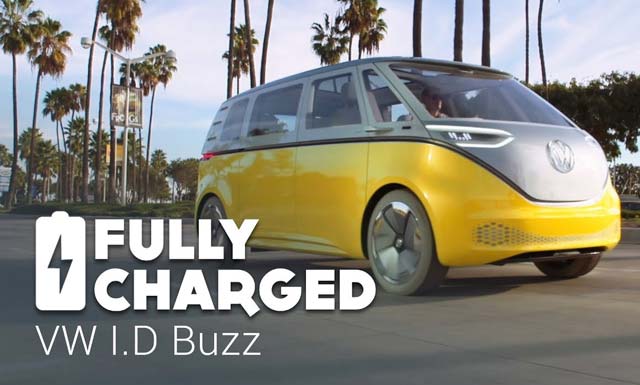 The Volkswagen ID BUZZ was recently reviewed by the Fully Charged’s Jonny Smith.

We never thought Californian police officers would close down a street in Santa Monica to allow Jonny Smith to test drive the extraordinary Volkswagen ID BUZZ. But they did. He also gets a look at the WW ID CROZZ. Jonny delivers a very comprehensive review of these extraordinary vehicles.

Jonny Smith takes the ID Buzz (and Crozz) for a test drive in SoCal. Check out that rectangular steering wheel, which disappears in autonomous mode.

At the Detroit Show in early 2017, Volkswagen showed the I.D. BUZZ concept car, a fully electric vehicle that taps in to the spirit and vibe that made the VW Microbus such an iconic vehicle — whether with Hippies and families in the Sixties or Surfer Dudes and Van Lifers today.

Within the framework of further development, Volkswagen has also set a launch date for the ID BUZZ. The vehicle will arrive at dealerships in 2022, after the compact four-door I.D.makes its debut. With the ID BUZZ, Volkswagen is mainly targeting markets in North America, Europe and China.

Just like the concept car that was shown in Detroit, the production model will also have its batteries mounted in the vehicle floor. Because the electric drive components — electric motor, power electronics, and such —don’t take up much space, the vehicle has a long wheelbase with short overhangs, allowing for a massively spacious interior and great proportions.

Among VW’s promises for the electric van are a 250-plus-mile driving range, passenger and cargo versions, and available autonomous capabilities.

The ID BUZZ won’t just be a passenger vehicle. Just like the classic T2, the ID BUZZ will both haul people and haul freight. Along with a minibus version, VW will also be offering an ID BUZZ CARGO variant for zero-emissions delivery of goods.

With Level 3 autonomous capability, this is an ideal concept for an electric van, particularly for delivering packages and goods to the inner cities.