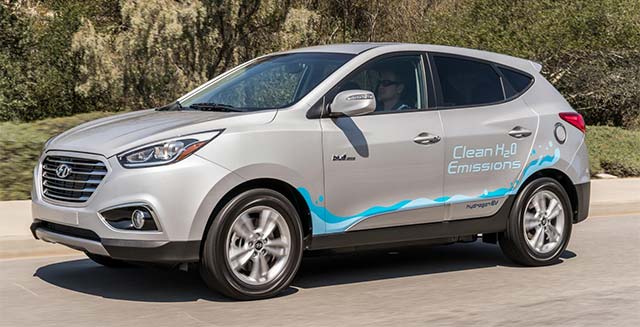 Hyundai Tucson Fuel Cell drivers have again surpassed an important threshold, accumulating more than three million miles on the roads and highways of both Southern and Northern California.

These fuel cell CUVs have emitted only clean water vapor, and by so doing, have replaced approximately 1,140 tons of CO2 emissions that would have been emitted by vehicles of similar size and capability. Hyundai has delivered more than 150 Tucson Fuel Cell crossovers since its introduction as the first mass-produced fuel cell vehicle in the U.S. market in 2014.

The Hyundai Tucson Fuel Cell CUV has a number of advantages over some other alternative fuels. The energy-rich hydrogen fuel provides an estimated driving range of 265 miles between fill-ups, similar to many gasoline vehicles.

On October 8, automakers are joining the nation in celebrating National Hydrogen and Fuel Cell Day to raise awareness of fuel cell and hydrogen technologies that can help to reduce greenhouse gas emissions while increasing the nation’s energy security. The date is a reference to hydrogen’s atomic weight of 1.008.