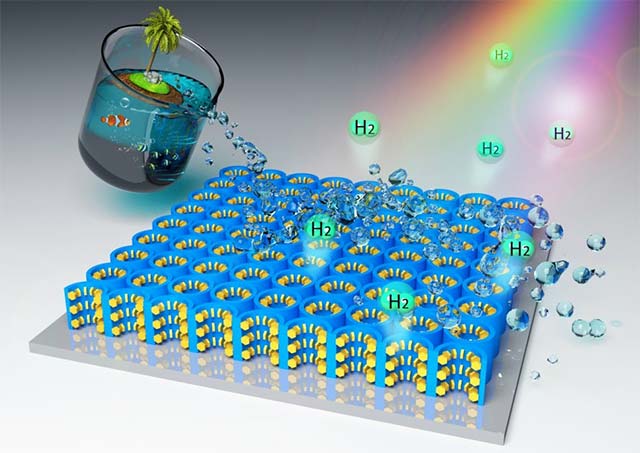 It’s possible to produce hydrogen to power fuel cells by extracting the gas from seawater, but the electricity required to do it makes the process costly. UCF researcher Yang Yang has come up with a new hybrid nanomaterial that harnesses solar energy and uses it to generate hydrogen from seawater more cheaply and efficiently than current materials.

The breakthrough could someday lead to a new source of the clean-burning fuel, ease demand for fossil fuels and boost the economy of Florida, where sunshine and seawater are abundant.

Yang, an assistant professor with joint appointments in the University of Central Florida’s NanoScience Technology Center and the Department of Materials Science and Engineering, has been working on solar hydrogen splitting for nearly 10 years.

It’s done using a photocatalyst – a material that spurs a chemical reaction using energy from light. When he began his research, Yang focused on using solar energy to extract hydrogen from purified water. It’s a much more difficulty task with seawater; the photocatalysts needed aren’t durable enough to handle its biomass and corrosive salt.

As reported last week in the journal Energy & Environmental Science, Yang and his research team have developed a new catalyst that’s able to not only harvest a much broader spectrum of light than other materials, but also stand up to the harsh conditions found in seawater.

Yang developed a method of fabricating a photocatalyst composed of a hybrid material. Tiny nanocavities were chemically etched onto the surface of an ultrathin film of titanium dioxide, the most common photocatalyst. Those nanocavity indentations were coated with nanoflakes of molybdenum disulfide, a two-dimensional material with the thickness of a single atom.

Typical catalysts are able to convert only a limited bandwidth of light to energy. With its new material, Yang’s team is able to significantly boost the bandwidth of light that can be harvested. By controlling the density of sulfur vacancy within the nanoflakes, they can produce energy from ultraviolet-visible to near-infrared light wavelengths, making it at least twice as efficient as current photocatalysts.

“We can absorb much more solar energy from the light than the conventional material,” Yang said. “Eventually, if it is commercialized, it would be good for Florida’s economy. We have a lot of seawater around Florida and a lot of really good sunshine.”

In many situations, producing a chemical fuel from solar energy is a better solution than producing electricity from solar panels, he said. That electricity must be used or stored in batteries, which degrade, while hydrogen gas is easily stored and transported.

Fabricating the catalyst is relatively easy and inexpensive. Yang’s team is continuing its research by focusing on the best way to scale up the fabrication, and further improve its performance so it’s possible to split hydrogen from wastewater.