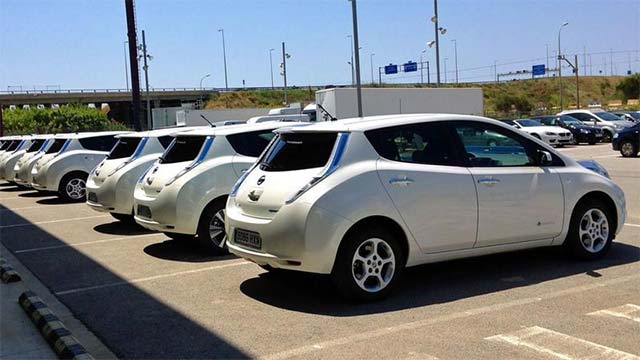 According to a new report from Navigant Research, 2017 sales of plug-in electric vehicles (PEVs) in North America are on track to be 50 percent greater than in 2016.

While PEV sales are expected to grow quickly in states with zero-emissions vehicle (ZEV) mandates, states and provinces with desirable PEV incentives, less stringent vehicle capability and range requirements, and positive demographic characteristics related to PEVs are also projected to be market leaders

Overall, in North America, the PEV market has grown by a factor of 10 since 2011, and 2017 is headed toward another record-breaking year.

According to Navigant Research, beyond 2017, sales are likely to continue to grow, but the rate of growth will slow. Part of this slowdown is simply the increase in the year-over-year denominator; another part is the likely phaseout of government subsidies in the first half of the 2020s. At that point, Navigant Research expects growth to be around the low teens.

Once BEVs cross the cost parity threshold with internal combustion engine vehicles (ICEVs), the market is projected to return to a faster pace of growth that is longer lived. This inflection is likely to occur around 2025, when battery pack prices drop to around $150/kWh. By 2026, Navigant Research expects PEV penetration to be between 7% (in the conservative scenario) and 11% (in the aggressive) of overall LDV sales. 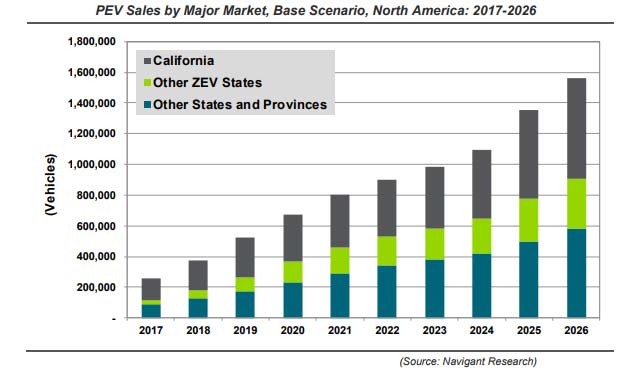 California has an outsized influence on the PEV market given the state’s significant government support and highly willing population. The state accounts for over 50% of PEV sales in all North America. Until 2025, the major challenge for North American markets will be in the non-California zero emissions vehicle (ZEV) states, namely the Northeast participating states (Connecticut, Massachusetts, Maryland, Maine, New Jersey, New York, Rhode Island, and Vermont). These states have been slower to adopt PEVs than California but have the same requirements for ZEV penetration within their new vehicle market. If statutes remain as is, it is likely automakers will begin marketing PEVs to these states in earnest, making the East Coast region the fastest growing market of the forecast period.

Outside of the ZEV states, PEV sales are expected to grow most quickly in states and provinces with desirable PEV incentives, limited vehicle capability and range requirements, and positive demographic characteristics toward PEVs. Hawaii, Washington, British Columbia, Quebec, and Ontario are likely to sustain market leadership in this regard. Other emerging markets include Nevada and Colorado. While Nevada has almost no incentives for PEV purchases, it benefits from proximity to the largest PEV market—California—and therefore is likely to see better consumer awareness and a more accessible used vehicle market than most other regional markets. Meanwhile, Colorado has highly attractive consumer demographics as well as government incentives.

The development and diffusion of PEV populations within the existing vehicle fleet has wide reaching implications for the electric power sector and key industry stakeholders looking to address the needs of a new class of vehicle owner. In the near term, the long-range BEV and an emerging used PEV market are likely to drive the diffusion of PEV ownership to consumers without dedicated residential charging locations and thus drive demand for faster charging services.

Municipal governments and utilities are likely to push for the development of solutions that serve multiple PEV owners and have the potential to pull PEV load to daytime hours. These solutions increase grid operator visibility of PEV load and diminish the likelihood that PEV clusters overwhelm localized grid assets like residential distribution transformers.