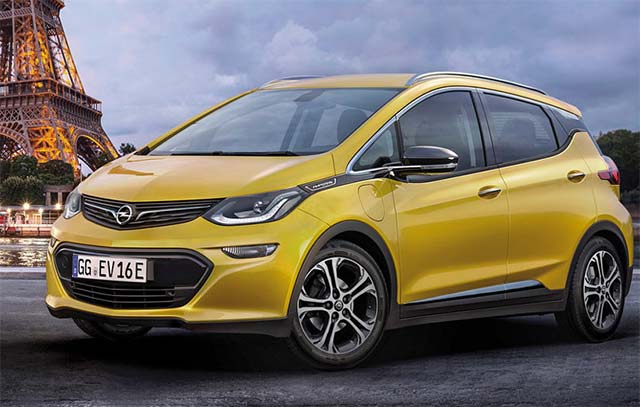 These include all Battery Electric Vehicles (BEV) and Plug-in Hybrids (PHEV) in Europe, of passenger cars and light commercial vehicles. Plug-in share of the European light vehicle market reached 1.63 % in June, the trend so far indicates further increases during the reminder of the year. Results from July and preliminary August indicate that growth is accelerating.

The German market is the highlight of 2017, with over 100 % increase over 2016 H1, making it the second largest market for plug-ins in Europe, after Norway.  Plug-in share in Norway is 29 % for BEV and PHEV combined. A good indication of what is possible with compelling savings on vehicle taxes, much lower running cost and a well-developed charging infrastructure.

The highlight of 2017 is Germany, the largest car market in Europe. Doubling plug-in sales vs 2016 H1 make it the 2nd largest market for electrically chargeable vehicles in Europe. Higher incentives were introduced in summer 2016, but the real kick came with the Diesel crisis expanding to Europe and the growing insight among leading OEM and legislators, that Plug-ins are a viable alternative. OEM plans for EV portfolios witness about spectacular u-turns, public interest and adoption have made several steps forward.

Nearly all Europe markets showed growth during H1-2017, only Netherlands‘ buyers still struggle with the incentive shift from Plug-in Hybrids to pure-electric vehicles. France and UK sales show only moderate increases for the first half year; all others have double or triple digit growth during the period, albeit from smaller bases. 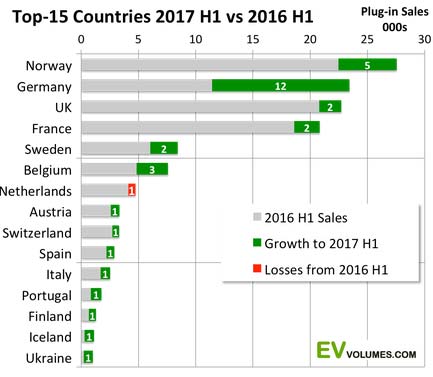 This diagram shows the share of plug-ins among all light vehicles sold in a country and the composition of BEVs and PHEVs in the overall share.

The plug-in share in Norway is off the chart, as usual, and still growing. No other country comes close to the 29 % share which Noway has performed during this year. The peak month, so far, was June with 35 %. BEV share was 16 %, PHEV share was 13 % for 2017 H1. EVs have a long tradition in Norway (think Th!nk and Buddy) and EV adoption in Norway started some years ahead of other countries. Thanks to obvious, stable incentives in form of generous tax and toll savings, EVs have become normality for light duty transport, despite long distances and a less than balmy climate. Cheap electricity from 99 % hydropower helps, too.

The mix of BEV vs. PHEV varies a lot between markets, highly depending on the individual incentive schemes. BEVs captured more share compared to 2016, but the current trend is towards PHEVs again, driven by the growing number of entries from German OEM. For 2017 YTD, 53 % of plug-in sales were all-electric in Europe.

It can be expected that future incentive schemes will reduce support for PHEVs and increase them for EVs. An example is the introduction of a tougher “bonus-malus” vehicle taxation system in Sweden from July 2018 onwards. 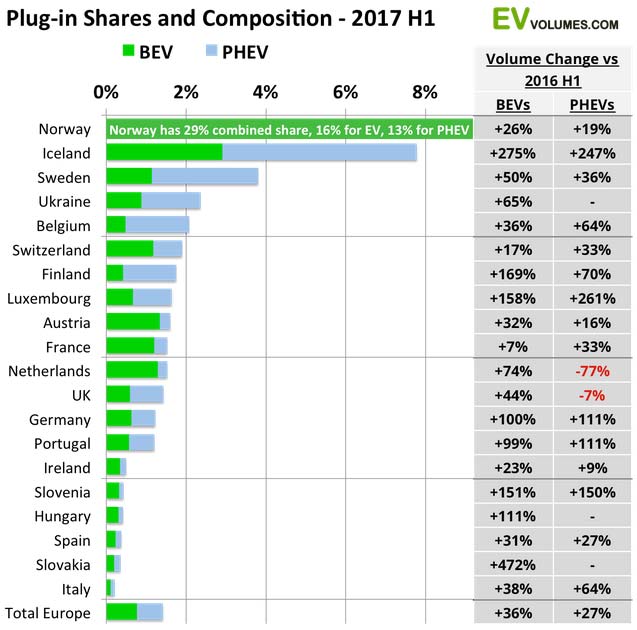 The best seller of 2016, Renault Zoe, increased another 32 % in Q2 and 45 % for the first half of 2017. The Zoe is on the market since 5 years now and much of the recent success can be attributed to the availability of a longer e-range version. A 41 kWh battery gives 400 km e-range by NEDC standards, which is more like 300 km under real conditions, but still. No other EV offers more range for a price starting of e.g. €26 000 in Germany. Over 50 % of Zoes are sold in France, where it costs even less.

Similar observations for the BMW i3, which now sells better than the (soon to be replaced) Nissan Leaf: For this year, the i3 offers a battery with 50 % more range (300 km NEDC, 220 km real) and doubled sales in Europe. It gained in many markets, not just in booming Germany.

After a slow start in April 2016, the new Mercedes GLC 350e Plug-in Hybrid became Daimlers best seller in the sector, the same time as the corresponding C-Class model lost half of its volume and 9 places in the ranking. The better is the enemy of the good, even among plug-ins. 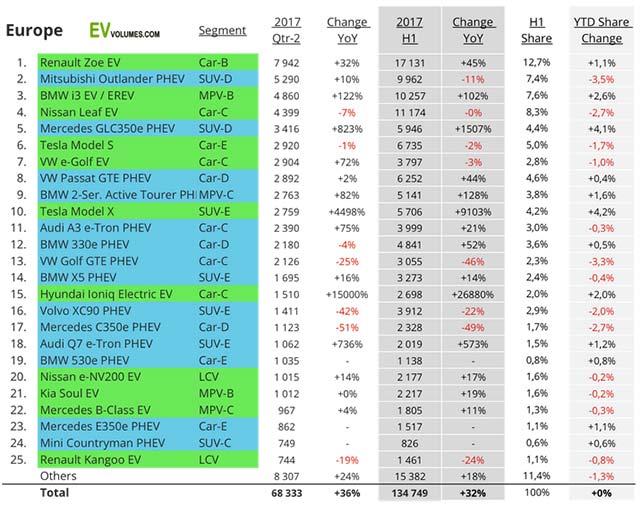 Since April, Plug-in volume and share growth has been significantly above 2016, which relates more to the weak May – July period of 2016, when the 3 leading models Zoe, Leaf and Outlander had some miserable month prior to e-range improvements and facelifts for the 2017 model-years. For this year, the share development follows a more consistent trend-line. Excluding the December PHEV rallies in NL (prior to incentives reductions), preliminary data we have for August show the highest share ever, so far: 2.2 % of Car+LCV sales in Europe were plug-ins.

PHEV incentives are now as low as they go in the Netherlands and we will probably not see these December spikes for 2017. Still, our expectation is further increases in share and a Europe volume of 305 to 310,000 units when the year is over, which is 25,000 units higher than our previous forecast. 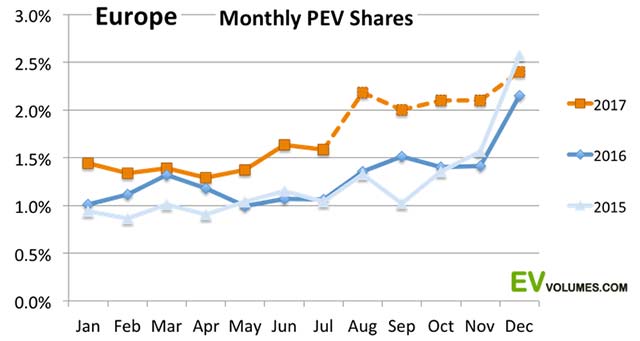 Drivers of EV growth are pricing and availability of new, longer range BEVs: New Leaf, Opel Ampera-e, Zoe, BMW i3 and further PHEVs spin-offs from popular ICE models. For markets, we see the highest volume growth potential in Germany. Planned and announced embargoes for diesel vehicles in an increasing number of European cities will heat up the demand for alternative propulsion, locally. We are looking forward to the rest of 2017 – let alone the coming years. Stay tuned! 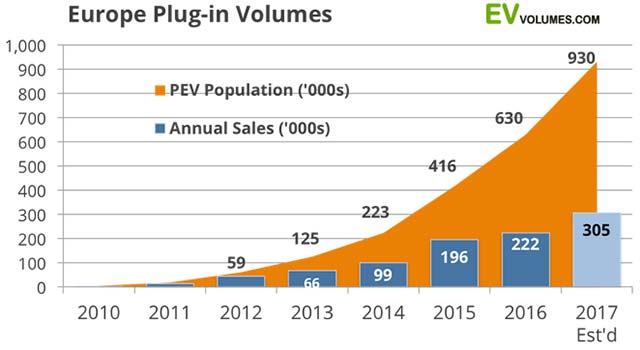