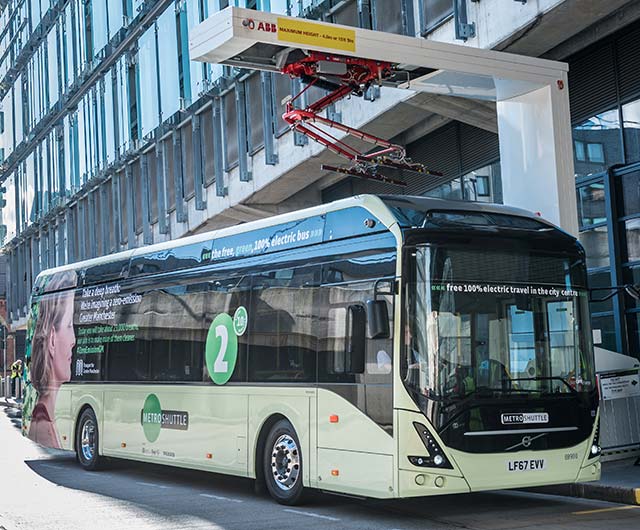 The pilot, which was launched in Manchester on September 22 by City Mayor, Andy Burnham, brings together for the first time in the UK Volvo’s zero emission, fully electric 7900e bus and OppCharge opportunity charging from leading EV charging provider, ABB. This charger can recharge a bus on its route between three to six minutes, enabling the potential for the first ever 24 hour continuous bus operation in the UK.

Operated by First Manchester for Transport for Greater Manchester (TfGM), the single deck vehicle will be operating on the Metroshuttle 2 route – a free-to-use service that provides access to key locations across the city centre. The system has been installed at the Shudehill Interchange and will be deployed for eight weeks.

Frank Muehlon, Head of ABB’s global business for EV Charging Infrastructure commented: “As a global leader in EV charging solutions we are proud to be partnering with Volvo and Transport for Greater Manchester on delivering the first ever fast charging bus installation in the UK.

ABB is the global market leader in DC fast charging, with a global installed base of more than 5,000 chargers since 2010. To date, ABB has installed 15 OppCharge systems across the world, enabling more than 150 electric buses to be charged. OppCharge is an open interface for the automated charging of both single and double deck electric buses, from any manufacturer, using a pantograph on the infrastructure to connect the bus to the charging point.

First introduced in mainland Europe in 2015, the Volvo 7900e provides up to 80% lower energy consumption than an equivalent sized diesel bus. It is a two-axle bus with electric motor and four high capacity 19kWh Lithium-ion batteries and offers zero tailpipe emissions.

Following the Manchester trial, the vehicle will be heading for a demonstration at London’s Heathrow Airport for a period of eight weeks. This will involve transporting airport staff and customers to and from the carparks and terminals.