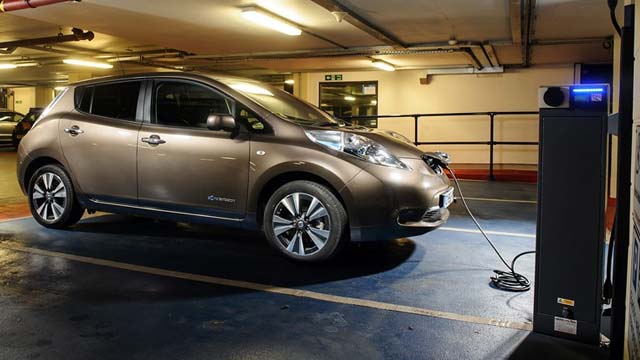 There will be more public locations to charge electric cars in the UK than there are petrol stations by the summer of 2020, according to new analysis by Nissan.

In contrast, the number of public electric vehicle charging locations is expected to reach 7,900 by the same point in time. However, the accelerating adoption of electric vehicles means this crossover could happen a lot sooner.

Just over 100 years since the first fuel station opened – November 1919 at Aldermaston in Berkshire – the number in the UK has peaked, declined and is expected to be overtaken by charging stations designed for battery, not combustion, powered cars.

More than 75% of UK petrol stations have closed in the last 40 years, whilst the number of electric vehicle charging locations has increased from a few hundred in 2011 to more than 4,100 locations in 2016, as electric car sales take off.

According to Go Ultra Low, the joint government and car industry campaign, more than 115 electric cars were registered every day in the first quarter of 2016, equivalent to one every 13 minutes. The campaign also believes electric power could be the dominant form of propulsion for all new cars sold in the UK as early as 2027, with more than 1.3m electric cars registered each year.

Edward Jones, EV Manager, Nissan Motor (GB) Ltd., said; ‘As electric vehicle sales take off, the charging infrastructure is keeping pace and paving the way for convenient all-electric driving. Combine that with constant improvements in our battery performance and we believe the tipping point for mass EV uptake is upon us. As with similar breakthrough technologies, the adoption of electric vehicles should follow an ‘S-curve’ of demand. A gradual uptake from early adopters accelerates to a groundswell of consumers buying electric vehicles just as they would any other powertrain.’

Nissan was the first manufacturer to introduce a mass-produced electric vehicle and has sold more EVs than any other car brand worldwide. The company has also been a strong advocate of supporting a convenient charging infrastructure – even so far as to partner with Ecotricity last year, calling on the UK government to introduce official EV charging point road signage.

Whilst the vast majority of electric vehicle owners charge at home, 98% of UK motorway services have charging stations, including rapid connectors that can charge a LEAF’s battery to 80% in just 30 minutes. The 30kWh Nissan LEAF, launched in January, delivers up to 155 miles on a single charge – a range that covers more than 90% of the average daily commuting requirements.

Nissan also recently announced the joint development of an atomic analysis methodology that uses amorphous silicon monoxide (SiO) to increase the energy density of its lithium-ion batteries. This development alone could increase the driving range of future Nissan electric vehicles by 150%.

Supply of fuel within the Capital is also becoming scarcer. Central London has nearly half as many petrol stations per car as the Scottish Highlands; only four remain within the congestion-charge zone. A notable closure in 2008 was one of the country’s oldest forecourts, the Bloomsbury Service Station, which had been operational since 1926.

Nissan’s recent partnership with world-renowned architects Foster + Partners, provided a conceptual vision for the Fuel Station of the Future. The result isn’t a conventional forecourt at all, but a combination of Vehicle-to-grid, battery storage, wireless charging, autonomous drive technology and over-the-air connectivity all combining to revolutionise how energy is used and distributed across Europe’s major cities.

Nissan believes these technologies, run in tandem with all-electric vehicles, will play an increasingly important role in helping major cities like London reduce harmful emissions. It took just eight days for London to breach its annual pollution limits in 2016 with pollution levels reaching 3.5x the legal limit in some of the Capital’s black spots.