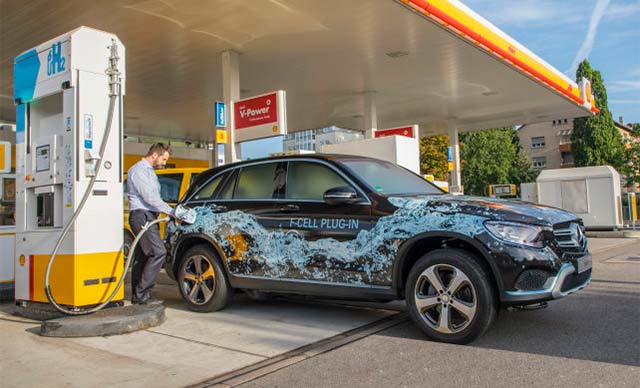 Germany’s H2 filling station network is growing at an increasing pace. After the opening of stations in Wiesbaden and Frankfurt in June, Daimler, Shell and Linde have now commissioned two more hydrogen stations in Sindelfingen and Pforzheim.

This brings the number of fuelling options for emission-free fuel-cell cars in Baden-Württemberg to nine, making the federal state Germany’s leading H2 region. The openings are another step in the partners’ efforts towards establishing a nationwide H2 supply network.

The new sites are conveniently located on the A8 (Pforzheim) and A81 (Sindelfingen) motorways, at key intersection points for traffic routes in southwestern Germany. The Sindelfingen H2 station is located near the historic Daimler vehicle production plant, which houses the company’s research and development centre, whose responsibilities include overseeing the development of the next generation of Mercedes-Benz fuel cell vehicles based on the GLC.

Daimler is the builder of the two hydrogen stations; their innovative H2 filling technology comes from the technology company Linde. Both are located at Shell service stations. All three companies are partners in the H2 Mobility joint venture, which is working to expanding the hydrogen infrastructure in Germany.

Ensuring the success of hydrogen mobility requires the simultaneous provision of an attractive range of fuel-cell vehicles as well as the necessary fuelling infrastructure. Germany currently has a total of 32 hydrogen refuelling stations in operation, sponsored by the German government via its National Innovation Programme for Hydrogen and Fuel Cell Technology (NIP). Altogether, the German government contributed 1.8 million euros to the construction of the two new stations. By 2018, the plan is to have 100 filling stations. The Clean Energy Partnership (CEP) demonstration project laid the foundations for the expansion of Germany’s hydrogen infrastructure by establishing common standards and norms.

The two latest hydrogen stations in Baden-Württemberg feature state-of-the-art technology and an intuitive fuelling experience for drivers, similar to refuelling conventional vehicles. The refuelling process takes between three and five minutes to complete. Sindelfingen and Pforzheim each have the capacity to serve 40 hydrogen-powered cars per day from now on.

Other hydrogen stations are currently at the planning stage or under construction in Germany. This year, filling stations in Wendlingen, Karlsruhe, Munich, Bremen and Kassel are to follow.

H2 Mobility just recently called for suggestions for other service station sites: several stations are to be built in regions with the largest potential hydrogen sales by number of fuel-cell cars (700 bar).

A hydrogen-powered fuel-cell vehicle emits no local pollutants or carbon dioxide (CO2). A number of manufacturers already offer such vehicles, with an operating range of between 500 and 700 kilometres. Daimler AG will present its latest generation of vehicles based on the Mercedes-Benz GLC later this year.

Hydrogen plays an important role in the debate on how Germany can achieve its climate goals. It is one of the options for extending the fuel supply in the transport sector in a climate-friendly manner, because climate-damaging CO2 emissions can be significantly reduced by using hydrogen generated produced with renewable energy.