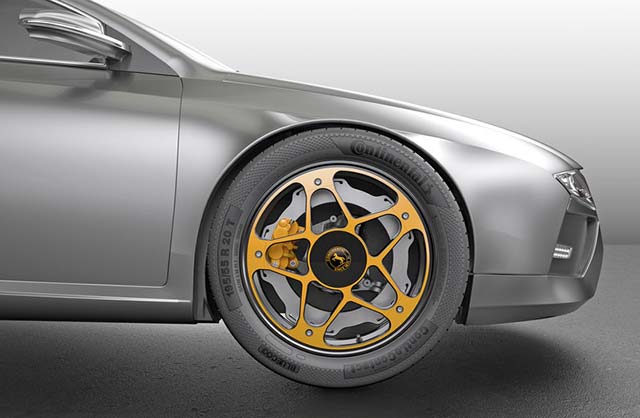 The technology company Continental has expanded its solution portfolio for electric vehicles, developing the New Wheel Concept to meet the specific requirements of these vehicles.

The wheel rim consists of two aluminum (Al) parts, the inner Al carrier star with the Al brake disk and the outer Al rim well with the tire. In contrast to conventional wheel brakes, the New Wheel Concept brake engages the Al disk from the inside. This allows it to have a particularly large diameter, which benefits the braking performance.

To increase the vehicle’s range, deceleration in the EV generates as much electricity as possible through recuperation (= braking using the electric motor), so the wheel brake is used less frequently. The corrosion-free Al brake disk also prevents the formation of rust (as is normal on cast-iron disks) which can impair the braking effect.

Thanks to the lightweight material, the New Wheel Concept reduces the weight of the wheel and brake, enabling lightweight construction in EVs. Advantages of the concept are much easier wheel and brake pad changes and that the disk is not subject to wear.

The New Wheel Concept is based on a new division between the wheel and the axle. Here the wheel consists of two parts, the aluminum carrier star, which remains permanently bolted to the wheel hub, and the rim well, which is bolted to the star. The wheel brake is fastened to the wheel carrier of the axle and engages from the inside with an annular aluminum brake disk, which in turn is bolted to the carrier star. The internal brake permits a wide brake disk friction radius, since the space available in the wheel is optimally utilized. During its development, the New Wheel Concept’s braking performance was initially designed for medium and compact class vehicles. In accordance with today’s requirements for this application, the brake is sturdy and fulfills all the established criteria – although it is used much less frequently in an EV. 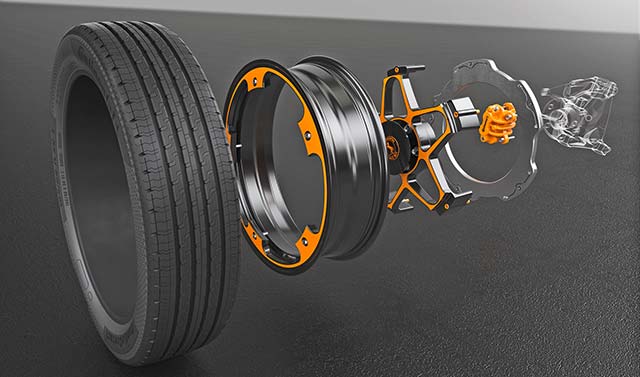 The dual New Wheel Concept also reduces the weight of the wheel and brake and reduces service costs due to a lifetime brake disk and an easy brake pad change.

“In EVs, it’s crucial that the driver expends as little energy as possible on the friction brake,” says Paul Linhoff, Head of Brake Pre-Development in the Chassis & Safety Business Unit at Continental. “During a deceleration, the momentum of the vehicle is converted into electricity in the generator to increase the vehicle’s range. That’s why the driver continues to operate the brake pedal – but it certainly doesn’t mean that the wheel brakes are active too.”

The deceleration torque of the electric motor is only no longer sufficient by itself when the driver brakes more energetically, or braking also has to carried out with the non-driven axle for driving dynamics reasons. The wheel brake is needed in this situation – and it must be available.

“Drivers want to be able to rely on a consistent braking effect – and too much rust on the brake disk in particular can really make this difficult,” Linhoff emphasizes. The reason behind the reduced performance is less friction between the brake pad and the brake disk. The automatic emergency braking function also has to fully rely on the availability of the friction brake effect.

In perfect harmony – material and design

The design of the New Wheel Concept uses the strengths of lightweight aluminum material for the brake. Thanks to the long leverage effect on the large brake disk, relatively low clamping forces are enough to provide a high level of braking efficiency – and since aluminum is a very good heat conductor, the heat generated in the disk during braking is quickly dissipated. 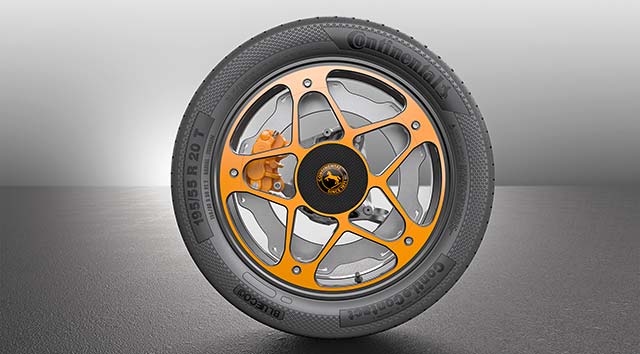 The design enables the use of a large aluminum brake disk and solves the problem of bad braking performance due to corroded brake disks.

Continental assumes, after the results of the initial practical tests, that the Al disk itself is not subject to wear, unlike cast-iron disks. With the New Wheel Concept, abrasion only takes place on the pads, and the design of the Concept makes replacing them – and the wheels – much easier.

The New Wheel Concept has yet another positive: “Because the brake disk is fixed on the outside and the brake engages from the inside, the brake caliper can be designed particularly light and stiff. The force is transmitted largely symmetrically into the center of the axle, and this has a favorable effect on the noise behavior of the brake,” says Linhoff – and that’s a side effect which is particularly attractive in a quiet EV.

Continental will also demonstrate the New Wheel Concept during the Frankfurt Motor Show.