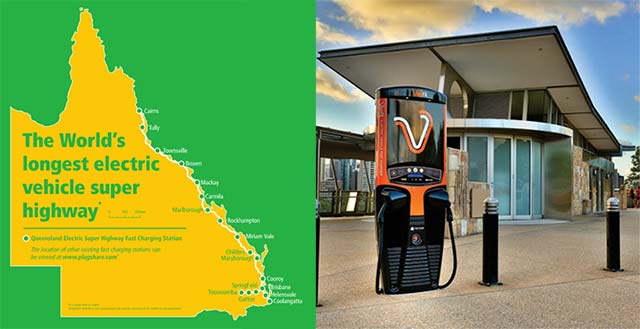 Australian-based Tritium has won a contract from the Queensland Government to supply 15 of its award-winning Veefil-RT 50kW fast chargers to be installed on the first phase of a new Queensland Super Highway.

The 1,800km electric super highway, from the Gold Coast to Cairns, will be the largest fast-charging network in any one state in the world and the Environment Minister and Acting Mains Road Minister, Steven Miles, said the project will kick start the EV revolution in the state.

The project is due to be operational in the next six months and, for the first time, it will be possible to drive an electric vehicle from the state’s southern border to the far north.

To further encourage the uptake of EVs, there will be no cost to drivers for use of the chargers in the first year, and the Veefil-RTs will use renewable energy purchased through green energy credits or offsets.

“This is an incredibly exciting project, and Tritium is proud to be involved – particularly as the Veefil was created in Brisbane, Queensland, our home state, and we are the only Australian designer and manufacturer of fast chargers for EVs,” explains Paul Sernia, the company’s Commercial Director.

“This project has been in planning for two years and through the competitive tender process Tritium offered a tailored solution for this fast-charging network.  The launch comes at a time when major car manufacturers and countries such as Norway, the Netherlands, France and the UK have all ‘put a date in the diary’ to phase out conventional petrol and diesel cars.

“The Veefil-RT is widely regarded as the most technologically-advanced charger of its class and supports both CHAdeMO & CCS/SAE-Combo standards, They are around 25 times faster than home charging, which means a driver can add 50km range to an EV battery charge in just 10 minutes or recharge 80 per cent of the car’s battery in around 30 minutes – about the time it would take for a coffee break on a long journey.

“The Veefil–RT can also be used by commercial vehicles, and a developing fast-charging infrastructure in the state will encourage organisations to consider changing to electric fleets and electric public transport.”