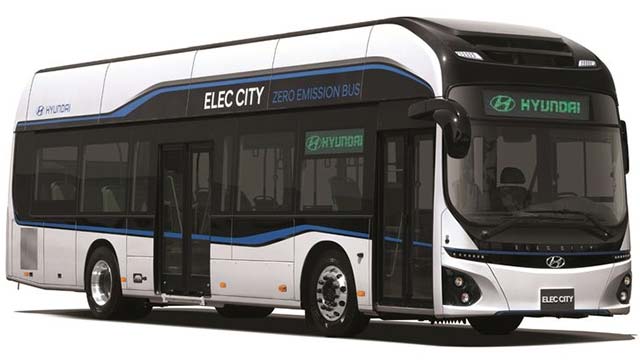 Equipped with a 256kwh lithium-ion polymer battery, the Hyundai Elec City electric bus can drive 290km (180 miles) on a single charge. Furthermore, it features a variety of safety- and human-centered facilities, such as Around View Monitoring and a Full Color Digital Cluster.

Elec City provides a glimpse into the future of the public transportation. The bus demonstrates the suitability of Hyundai Motor’s pioneering fully-electric powertrain for commercial application.

Hyundai intends to begin production and sales of the Elec City in 2018.

Hyundai has a pedigree for developing alternatively-fueled commercial vehicles, with research and development into hybrid, electric and fuel cell technology starting in 1999. This led to Hyundai Motor producing the ground-breaking Blue-City commercial vehicle in 2013 – the world’s first Compressed Natural Gas hybrid bus.

Hyundai Motor has achieved a lot in the eco-friendly vehicle field, but we will never stand still. We continue to invest heavily to ensure zero-emission technology for all commercial vehicles.