Hyundai Mobis Aims to Develop All Autonomous Driving Sensors by 2020 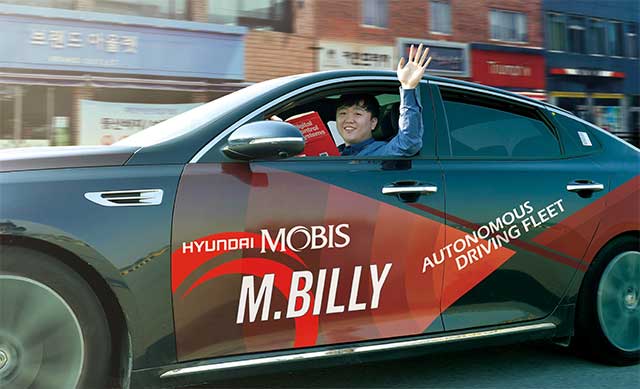 Hyundai Mobis plans to use its proving ground, which opened last June in Seosan, South Chungcheong Province, as a test bed for new technologies, with the goal of becoming a leader in future car technologies.

The automotive supplier announced at the proving ground that it plans to develop autonomous driving sensors, which are essential for future vehicles, by 2020, and lead the global market for autonomous driving based on its technology power.

To this end, the company will increase its R&D investment cost from the current level of 7% of its parts sales to 10% by 2021. It will also invest 50% of it in ICT, which is closely related to autonomous driving, expanding related R&D workforce and infrastructure and actively promoting technical partnerships with global companies.

“We are aggressively investing in autonomous driving technologies. We will also increase our R&D workforce for autonomous driving from the current level of 600 to over 1,000 by 2021 and increase the number of M.Billy, our global autonomous test vehicles, from 3 to 20 by next year,” forecasted Yang Seung-wook, Executive VP of ICT R&D Center at Hyundai Mobis.

German companies with which Hyundai Mobis signed a partnership to develop radars include SMS and ASTYX. Both are radar developers possessing the best design capabilities; the former jointly developed radars with TRW and Continental, and the latter with BMW and Autoliv.

Working with SMS and ASTYX, Hyundai Mobis will develop five radars for autonomous cars, which can allow cars to detect 360° around them by the end of this year and begin full-fledged production by 2021. The company will cooperate with SMS for entry-level front and side radars and with ASTYX for high-performance front radars. It will also complete a joint R&D project with Seoul National University for improving the target distinguishment of radars.

To ensure the performance and quality of sensors, Hyundai Mobis laid a dedicated test track for sensor testing in Seosan Proving Ground and commenced tests from last June. The company will also test ADAS equipped with their proprietary sensors and apply the sensors to M.Billy, its autonomous driving test car, which will run on actual roads to help improve performance and safety.

Hyundai Mobis deems its radars under development to have excellent target distinguishment capabilities with a resolution higher than its global competitors’ and greater cost competitiveness by integrating two chips into one.

The reason why the company is focusing on developing sensors is that it can implement optimal performance for autonomous driving only by securing all of the three technologies (perception, decision and control), thus enabling a bonafide competitive edge in the global market. This is also because the sensor market is forecasted to accelerate rapidly; the share of sensors in the ADAS (level 2 autonomous driving) market is expected to reach 60% by 2021.

To enable a quantum jump for sensors, Hyundai Mobis plans to actively utilize new technologies such as AI and deep learning.

From last year, Hyundai Mobis has continuously increased the rate of operation and the number of test cars of the proving ground to enhance the verification of the performance and durability of core auto parts. In particular, it has enhanced the performance of its sensors and tested them on the advanced test track and the radar test track to verify the performance of the ADAS technologies equipped with them.

The company evaluates the performance by comparing data from sensors to the actual location of the objects in real time. For this, it collected the coordinates of the lanes of the normal track, advanced test track and high-speed circuit by utilizing high precision maps and DGPS system.

The nation’s only radar test track that measures 250 meters in total length. Currently, tests are being conducted on this track to improve the reliability and performance of radars. On this track, a car equipped with a radar sensor is positioned in the center and the detection performance of the sensor is measured using reflective plates called TCR that are installed at 5-meter intervals.

This sensor test measures the range and angle of detection and resolution and accuracy. Resolution is a measure of the minimum separation between two targets that enables them to be distinguished.

The advanced test track commenced operations last June, earlier than K-City, an autonomous driving test bed being constructed by the Ministry of Land, Infrastructure and Transport in Hwaseong, Gyeonggi Province. The advanced test track is designed to verify the performance of sensors in actual road circumstances with V21 (Vehicle to Infra: communication between vehicle and road infrastructure) station, bus stops, roundabouts, traffic lights and an autonomous parking test area in Fake City. The perception, decision and control of autonomous cars are tested comprehensively in urban environments as a means to improve the reliability and performance of autonomous driving technologies.

Hyundai Mobis not only tests the performance of sensors but it also tests the functionality of ADAS technologies equipped with these sensors. It has also reinforced testing of control parts that receive information from sensors and move, including steering, braking and suspension units.