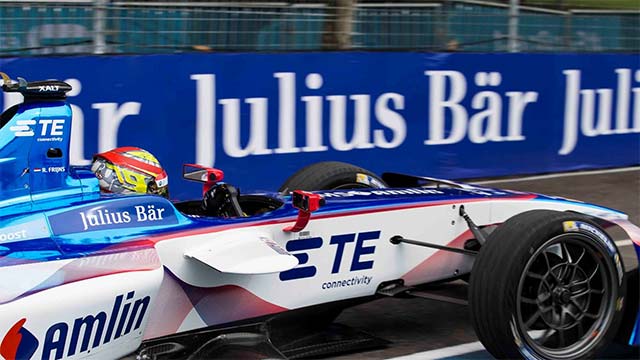 Formula E announced at the Monaco ePrix that Julius Baer – leading Swiss private banking group – has extended its partnership as the Global Partner of the electric street racing series until the end of the 2020/21 season.

The extension of the partnership, in advance of the contract renewal at the end of season five, demonstrates Julius Baer’s ongoing commitment to the world’s first fully-electric single-seater racing series and its mission of pioneering innovation and promoting sustainability.

Julius Baer joined the electric revolution prior to the inaugural race of the FIA Formula E Championship in September 2014, around the grounds of the Olympic Park in Beijing.

Since the beginning of the partnership, Julius Baer has increased its involvement in Formula E with activations such as Julius Baer pole position and race title sponsorship, including the last event in Mexico – the 2017 FIA Formula E Julius Baer Mexico City ePrix.

Alejandro Agag, Founder and CEO of Formula E, said: “I’m extremely happy to see Julius Baer extend their partnership with Formula E. They have been involved in the series since before the first-ever race took place, and it’s fantastic news that they’ll remain part of the Formula E family until at least the end of the 2020/21 season. To extend the partnership with over two years left prior to the renewal shows commitment to the concept of Formula E.”

Boris F.J. Collardi, Chief Executive Officer at Julius Baer, commented: “Julius Baer is very proud to extend the partnership with Formula E as the exclusive Global Partner until 2020/21. We have recognised the great potential of this novel platform right before the very first race in 2014. Visionary thinking is not only a concept within Julius Baer, we live and we share it with Formula E. The renewal of the partnership highlights Julius Baer’s continuous support and commitment to Formula E and its forward-thinking and innovative approach.”