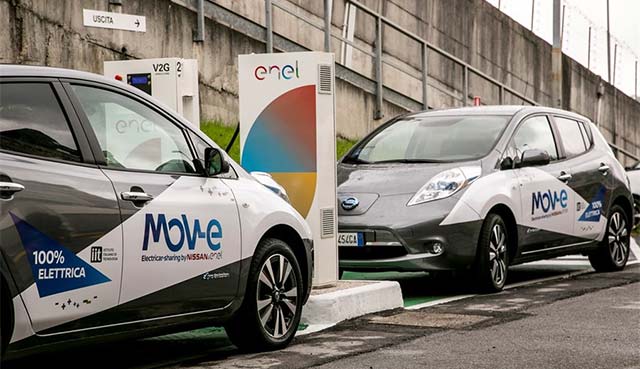 The first “vehicle to grid” (V2G) electric car recharging facilities have arrived in Italy. Thanks to an agreement signed between Enel Energia, Nissan Italia and the Italian Institute of Technology (IIT), a pilot corporate electric car sharing project has started with V2G chargers at the IIT headquarters in Genoa.

V2G technology allows electric cars to be considered as real “batteries on wheels”, able to store unused power and discharge it to the grid. All these functions are available thanks to bidirectional charge management.

The columns installed at the IIT will, for the moment, work unidirectionally for recharging and will be the subject of a pilot development project with IIT, pending the definition of the regulatory framework for V2G in Italy.

For car sharing, Nissan has made available to the IIT two 100% electric vehicles, the LEAF model, as well as an App Management Platform called Glide, while Enel Energia has installed two V2G charging stations at the Genoa headquarters of the Institute.

Along with Nissan, Enel has launched in Denmark the first fully commercial V2G hub worldwide, at the Danish utility Frederiksberg Forsyning, which has also bought 10 Nissan e-NV200 zero emission vans and where 10 V2G chargers are installed. Recently, 17 additional chargers have been installed across Denmark. Thanks to V2G technology, electric vehicles can expand the range of services available to future energy management systems. In fact, when the vehicles are stationary, the car batteries inject power into the network, helping to stabilise it and offering grid balancing services to Transmission System Operator Energinet.dk, in return for remuneration.

Similar activities are already existing in the UK, where 9 V2G chargers have been already installed at Nissan Technical Centre Europe in Cranfield and 1 in the Newcastle University.

The pilot project launched in Genoa is also the result of a partnership between IIT and Enel Energia, which was launched in February last year through the signing of a Memorandum of Understanding for Research, Industrialisation and Integrated Application of Products, Services and Innovative Solutions in the field of energy efficiency and distributed generation. The application fields mainly concern the production of graphene batteries, more efficient photovoltaic panels using graphene and a new renewable generation system able to exploit the motion of the sea.

Nissan and Enel Energia, as well as collaborating on the development of V2G, signed a commercial partnership in June last year and in November 2016 launched “e-go All Inclusive”, the first integrated offer for electric mobility in Italy. “E-go All Inclusive” is a turnkey proposal that includes, at a monthly fixed fee, the box station for domestic recharging (installation included), the Nissan LEAF with a 30 kWh battery and the e-go App, to locate all chargers In Italy and recharge the car.

May 5, 2017Blagojce Krivevski
BMW i enjoys ever increasing success and market sharePlug-in sales rose 30% in Europe in first quarter