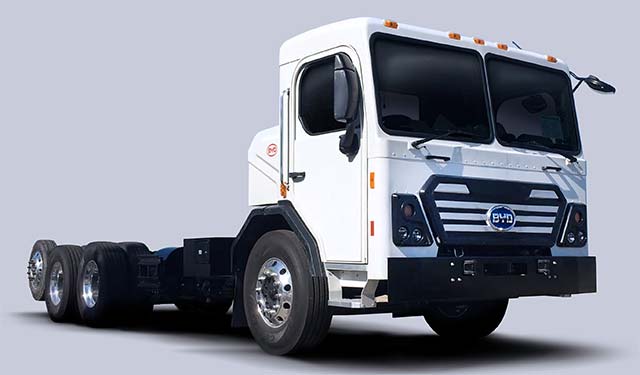 This new vehicle from BYD represents the first heavy-duty refuse truck designed and built by an original equipment manufacturer and is 100 percent battery electric.

“BYD continues to lead the heavy-duty electric vehicle market with our advanced battery technology, and this new refuse truck is just the latest example of our vehicle solutions that can save fleet customers tens of thousands of dollars annually,” said Stella Li, President of BYD Motors. “BYD’s medium- and heavy-duty battery electric vehicles have a lower total cost of ownership and can be a one-for-one replacement with fossil fueled vehicles in fleet operations.”

BYD’s 10-ton payload refuse truck provides 76 miles of range with minimal battery degradation. The truck is a cab and chassis platform, which includes the batteries, high voltage control system, all-electric propulsion system, and electric power take off for powering the hydraulic system to operate the refuse truck bodies. This platform is designed to integrate with all of the major refuse truck body builders in North America, and can be configured as a side loader, automated side loader, front loader, rear loader, or roll off.

The fact that this truck was built by BYD in its entirety, as opposed to as a retrofit of a CNG or diesel truck, means that the entire system was designed with electric propulsion in mind. For operators, that translates to optimized efficiency, maintenance, and usability throughout its life.

Fleet managers can expect more than $13,000 of operational cost savings annually based on service routes of 60 miles per day/five days a week. These savings are due to high-efficiency electric motors and motor controls, as well as lower maintenance on propulsion systems, fewer fluids to change, less brake wear due to cutting-edge regenerative braking technology, and fewer moving parts. Manufactured in the City of Lancaster, California, the BYD refuse truck is compliant with FMVSS and CMVSS regulations.

The BYD battery-electric refuse truck can charge at 40 kW, 80 kW, 100 kW, or 200 kW rates, requiring between one and five hours to charge depending on the power interface used. BYD’s refuse truck battery technology allows for a projected 80 percent capacity after 5,000 cycles or 14 years, if charged every day.