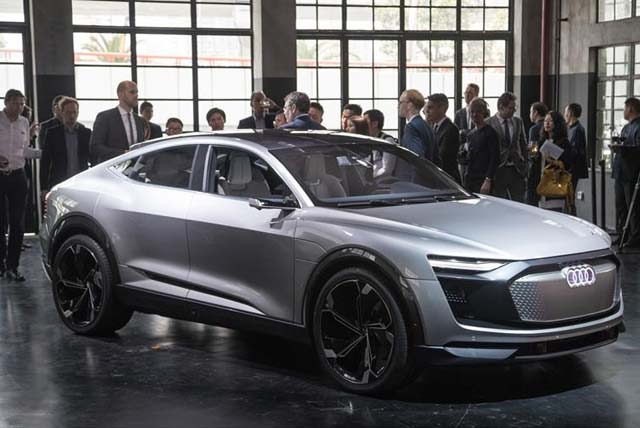 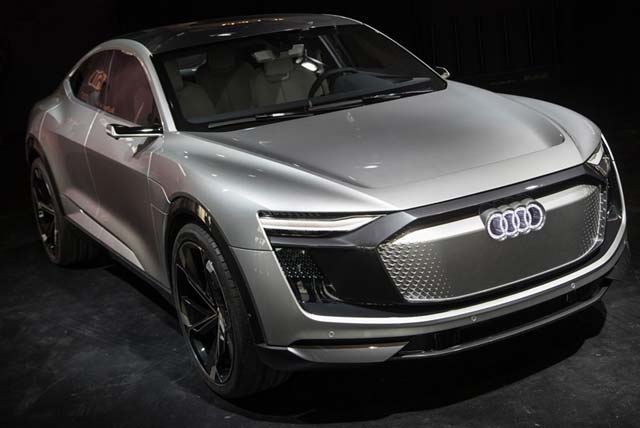 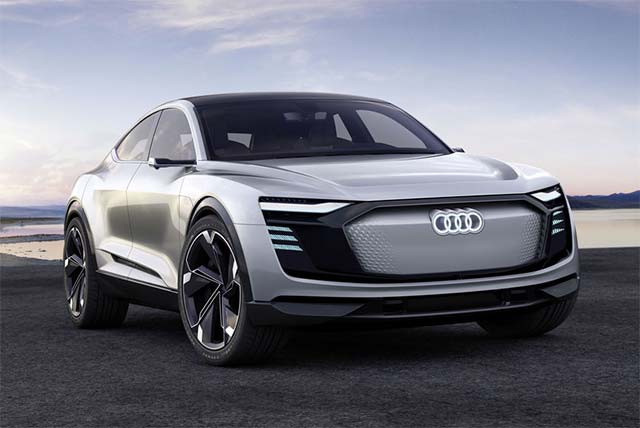 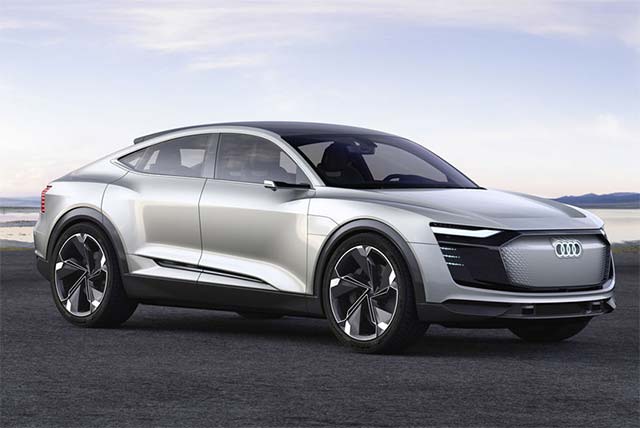 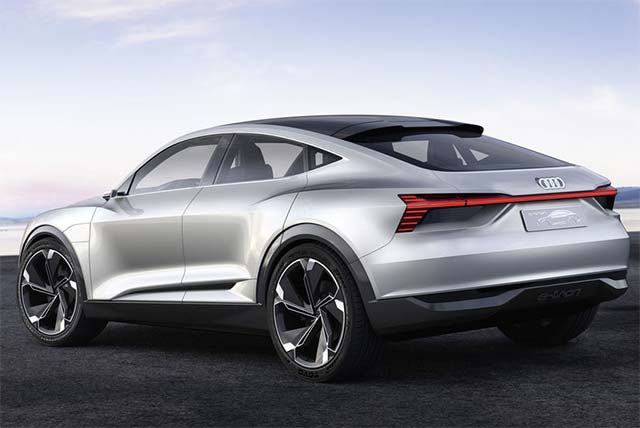 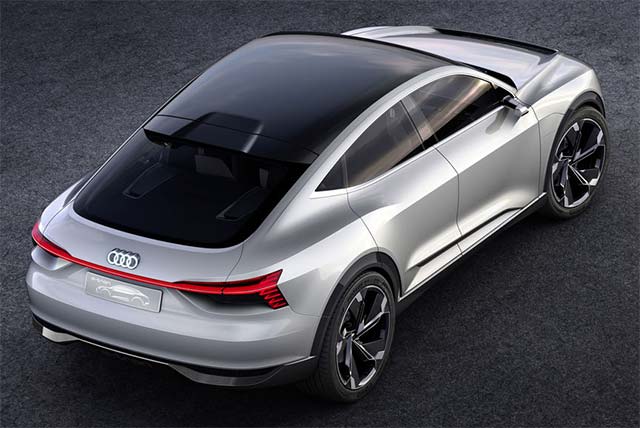 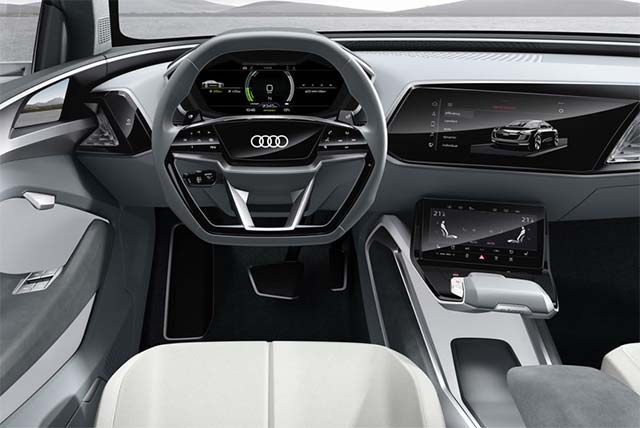 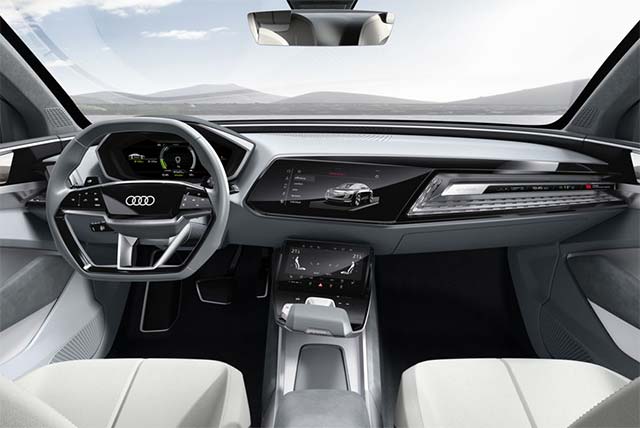 Design study and technology demonstrator, electric car and power pack in the guise of a coupé: Audi presents a versatile concept car at the Shanghai Auto this spring. The four-door Gran Turismo Audi e-tron Sportback concept comes with a 320 kW electric drive.

The formal idiom combines classic Audi elements with an array of trendsetting details: an electrifying architecture, tailored consistently to the technology and the package of the electric drive.

The Audi e-tron Sportback represents an important milepost for Audi along the road to electric mobility.

Rupert Stadler, Chairman of the Board of Management of AUDI AG, confirmed: “Our Audi e-tron will be starting out in 2018 – the first electric car in its competitive field that is fit for everyday use. With a range of over 500 kilometers (310.7 miles) and the special electric driving experience, we will make this sporty SUV the must-have product of the next decade. Following close on its heels, in 2019, comes the production version of the Audi e-tron Sportback – an emotional coupé version that is thrillingly identifiable as an electric car at the very first glance.”

In its consciously light-colored interior the Audi e-tron Sportback concept offers a blend of functional clarity and reductive controls as a formal principle. Expansive touch-sensitive screens below the central display, on the center console and in the door trims supply information and interact with the on-board systems. Horizontal surfaces on the dashboard and the seemingly floating center console convey a sense of open perspectives for the occupants of the four individual seats.

The concept car’s lighting technology is an innovation that is visible by both day and night. Digitally controlled Matrix LED units at the front and rear produce an excellent light yield. Minuscule Digital Matrix projectors literally make their mark on the road ahead, turning light into a versatile, dynamic channel of communication with the surroundings. The brand with the four rings was the first in the world to adopt full LED headlights, and gave Matrix LED technology, laser lighting and OLED technology a significant push towards their breakthrough. The technology study for Shanghai now premieres a whole host of complex functions that steer vision and interaction with the surroundings in a new direction.

Narrow light strips on both sides below the front lid – the daytime running lights – become the eyes on the face of the study. Thanks to a combination of LEDs and a micromirror-studded surface plus complex control technology, a large number of animated movements and signatures are possible. When the e-tron Sportback starts and also when the doors are opened, the system uses switchable segments to generate dynamic visual welcome signals.

Below the daytime running lights, to the left and right of the Singleframe, there are two large- area light fields each comprising an arrangement of around 250 LEDs. They offer a vast array of possibilities for creating engaging graphics or specific communicative signs, even while on the move.

For its drive, the e-tron Sportback uses a configuration that will also be adopted in future production Audi models with all-electric drive: One electric motor on the front axle and two on the rear power all four wheels, transforming the high-performance coupé into a quattro in typical Audi style. 320 kW of power – which can even reach 370 kW in the boost mode – provide a fitting level of propulsion, with the sprint from 0 to 100 km/h (62.1 mph) a done deal in just 4.5 seconds. With the battery’s energy content of 95 kilowatt-hours, its range is in excess of 500 kilometers (310.7 miles) (NEDC).

As previously on the e-tron quattro concept, the technology study’s liquid-cooled lithium-ion battery is positioned between the axles below the passenger compartment. This installation position provides for a low center of gravity and a balanced axle load distribution of 52:48 (front/rear). And that gives the sporty SUV outstanding driving dynamics and driving safety compared with other vehicles in the segment. The battery can be charged by the Combined Charging System with dual connections for alternating current (AC) and direct current (DC).

Dr. Dietmar Voggenreiter, Member of the Board of Management for Marketing and Sales at AUDI AG, understands the special significance of electric mobility for the market in China: “We have made a conscious decision to give the Audi e-tron Sportback its first showing here in Shanghai, because China is the world’s leading market for electric automobiles. That applies as much to the infrastructure and financial support as it does to sales. There are already about 150,000 charging stations in the country, with another 100,000 due to come on stream by the end of 2017. We are well equipped for this rapid growth. In the next five years we will be offering five e-tron models in China, including purely battery-powered vehicles with ranges well in excess of 500 kilometers (310.7 miles) such as the Audi e-tron Sportback.”

The study vehicle’s front end displays the familiar octagonal Singleframe with an overtly wide, horizontal cut – the greatly reduced amount of air required by the electric motor means the large opening can be omitted here. The sculptural surface painted in the body color has a structured pattern emblazoned with the four-rings logo – just like the grille of the classic Singleframe.

The edges of the central surface are drawn back, allowing air to flow through at the top. The air inlet is bracketed again by an octagonal, black-painted frame that structures almost the entire width of the front end.

Between the front lid extending low down, the front apron and the wheel arches, it combines with the light units to give this Audi an unmistakable face.

The Audi designers also adopt a new tack for the air flow through the front lid. Above its front section, which dips deeply at the front, a bridge running parallel with the nose connects the two wheel arches and also doubles up as an air deflector. This gives the front end a much more dynamic character than the hefty forward structure of a car with a combustion engine installed at the front.

At the sides of the concept car, the wheel arches extending well out from the cabin with pointedly horizontal top edges define the conspicuous quattro architecture. As well as providing visual evidence of a wide track and dynamic potential, they also bind the e-tron Sportback into the brand’s DNA. Large 23-inch wheels in a technical 6-spoke design highlight the confident presence of the imposingly dimensioned coupé. An exterior length of 4.90 meters (16.1 ft), a width of 1.98 meters (6.5 ft) and a height of 1.53 meters (5.0 ft) with a wheelbase of 2.93 meters (9.6 ft) position the e-tron Sportback in the C segment, close to the Audi A7.

Small cameras replace the exterior mirrors. This technology offers other advantages besides improved air flow and reduced wind noise. The blind spot of the physical exterior mirror is virtually eliminated, as is the obstruction to the diagonal forward view. The camera images are shown on separate displays in the doors. Audi is showing this technology as a concrete foretaste of the production version.

At the 2015 Frankfurt Motor Show Audi unveiled the Audi e-tron quattro concept – the forerunner of the brand’s first all-electric-drive production automobile. As a radically reconfigured SUV it offers a range of up to 500 kilometers (310.7 miles) with the spaciousness and comfort of a typical full-size automobile from Audi. It has the road performance of a high- performance sports car – the Audi e-tron quattro sprints from 0 to 100 km/h (62.1 mph) in only 4.6 seconds. The production version of this pioneering electric SUV will appear on the market in 2018. The Audi e-tron Sportback concept car will be followed by its production version in 2019.