Nissan and EVgo to build i-95 Fast-Charge ARC connecting Boston and Washington D.C. 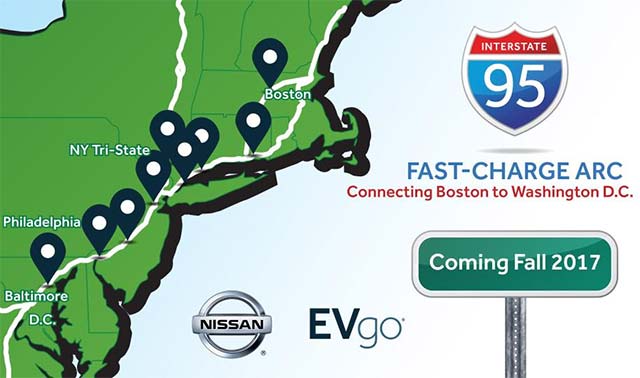 Nissan and EVgo have revealed a plan to connect Boston and Washington D.C. via nine electric-vehicle DC fast-charge sites.

Unveiled at the opening ceremony of the 2017 New York Auto Show, the plan will deliver a robust charging infrastructure along I-95, providing EV owners peace of mind when driving along the route. The Northeast charging route is slated to be on-line this fall.

Each station will feature both CHAdeMO and Combined Charging System (CCS) DC fast-charging outlets as a part of Nissan’s inclusive “Infrastructure for All” initiative. When plugged into a DC fast charger, a Nissan LEAF can be charged up to 80 percent in approximately 30 minutes.

As the global leader in EV sales, Nissan has played a leading role in growing the number of DC fast-charging stations in the U.S., to more than 2,100 CHAdeMO connections to date. As a part of the “Infrastructure for All” initiative, Nissan also played a key role in the 1,200-plus CCS DC fast-charge connections, and more than 38,000 Level 2 chargers installed across the country.

The goal of the “I-95 Fast-Charge ARC” is to create a true inter-city charging network to encourage long-distance EV travel along the Northeastern seaboard. The corridor represents the newest addition to EVgo’s network of more than 900 EV fast-charging stations in more than 600 locations.

The “I-95 Fast Charge ARC” is already under construction. Covering the 500-mile span between the two cities, the nine sites and 50 total charging stations will have a capability of charging four or more EVs simultaneously at a power output of 50kW. The charging sites have been designed with future advances in EV technologies in mind, and have been pre-wired for a high-power charging power output of up to 150kW with simple upgrades once such technology is available to consumers.

“Regardless of range capability, a convenient fast-charge infrastructure along high-traffic routes is imperative in the mass-adoption of electric vehicles,” said JeSean Hopkins, senior manager, EV infrastructure strategy & business development, Nissan North America, Inc. “This element of the EV equation is seemingly overlooked by others, but we’re all-in. Following a similar project in California, this is our second ‘corridor’ project in the U.S. and completion is expected in time for the launch of the all-new Nissan LEAF.”

“This charging corridor will provide the best public charging experience available in the U.S. to drivers in one of the most densely populated and highly trafficked routes in the country, affirming Nissan’s commitment to EV drivers,” said Rob Barrosa, vice president, OEM strategy & business development at EVgo. “The sites are also designed to accommodate 150kW high-power charging, paving the way for charging the next generation of EVs on the East Coast.”