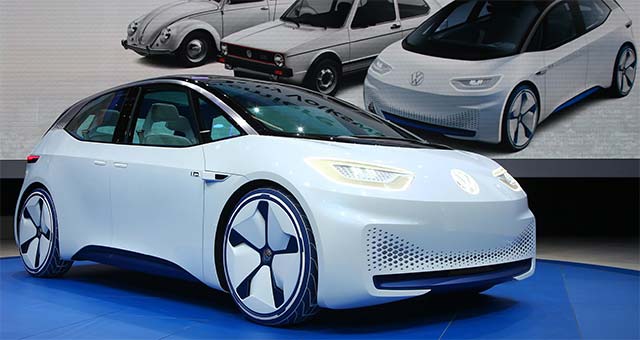 Volkswagen is so keen to leave the diesel-emissions scandal behind and focus on the future with a range of electric vehicles scheduled to go on sale between 2020 and 2025.

The ID concept, the funky-looking show car unveiled at the Paris Motor Show last year, is a statement of intent from VW. It promises that by 2020 the first electric ID production cars will be on the road at a price on a par with comparably powerful and well-equipped Golf models. Volkswagen is looking even further ahead with this concept car: in “ID Pilot” mode, it is capable of fully automated driving, a technology that should be ready for series production in 2025.

Volkswagen has also set itself the goal of selling a million electric cars a year by 2025 and the production version of the Volkswagen ID will make a decisive contribution towards this ramp-up of e-mobility.

The ID is the first compact Volkswagen based on the newly developed Modular Electric Drive Kit (MEB) that is designed as a purely electric vehicle architecture. This approach to the design results in a range of advantages, in particular the packaging. The ID’s zero-emissions drive system consists primarily of the electric motor, power electronics and transmission integrated in the rear axle, a space-saving high-voltage flat battery in the floor of the car and ancillary equipment integrated in the front of the car.

The electric motor has a power output of 168 horsepower (125 kW), giving the ID zero to 62 mph acceleration in less than 8 seconds and a top speed of 99 mph.  Subsequent production versions could also be offered with more or less powerful electric motors. In parallel, the concept also hints that it will be possible to configure the ID with different battery capacities. This would allow the drive system to be modified to suit the owner’s individual needs. The Volkswagen ID will have a range of between 249 and 373 miles on a single charge, under European test conditions.