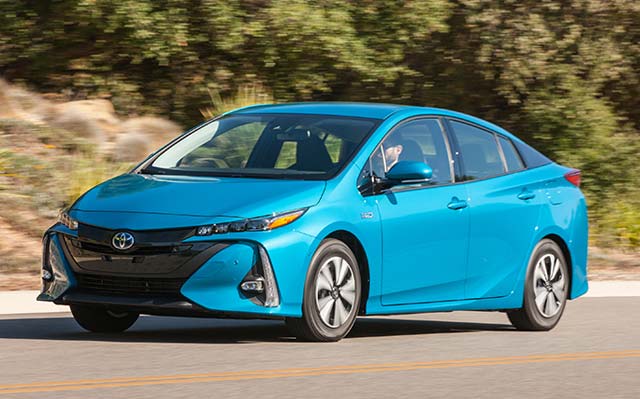 Toyota Motor Corporation has launched the new Prius PHV in Japan and sales will begin immediately across all dealerships in the country.

Toyota is producing the model at its Tsutsumi plant and is targeting sales of 2,500 units in Japan. Toyota said it expected to sell up to 60 000 worldwide a year, with more than half of the sales coming from Japan.

The Prius PHV has a range of 68.2 km (42.4 miles) according to Japanese standards. Due to a different methodology in measuring a car’s electric mode range, the vehicle’s’ range is listed in the United States as about 40.2 km (25 miles).

The Prius PHV features the world’s first “solar charging system” in mass-produced cars. This system supplies energy from sunlight to the traction battery while the vehicle is parked, supplying the amount of electricity sufficient for driving the vehicle a maximum of around 6.1 km/day (approximately 2.9 km/day on average).

When the newly added EV Power Supply Mode has been selected, the vehicle’s external electrical power supply function can supply household electricity without the engine being turned on. In addition, when the HV Power Supply Mode has been selected, the Prius PHV (with the engine running) can supply electricity for about two days at a maximum output level of 1,500W, when starting with a full tank of gasoline. The Prius PHV thus helps to support Toyota’s disaster recovery support activities. For example, vehicles equipped with the external power supply function can be introduced into company fleets and loaned out following disasters.

With the new Prius PHV (Prius Prime in the US), Toyota has greatly advanced on the environmental performance that is characteristic of the Prius lineup, along with the powerful and smooth drive which is an attribute of an electric vehicle. Futuristic advanced equipment has been added and charging convenience greatly improved, thus evolving the new Prius PHV into a prime vehicle.

Toyota will also launch new Welcab versions (special features have been installed by Toyota) in April. A new model with a rotating and tilting front passenger seat makes it easier for a person requiring assistance to get in and out of the vehicle, thus easing the burden on the caregiver.

Toyota positions plug-in hybrids as the core vehicle segment in the company’s Toyota Environmental Challenge 2050―where the goal is to achieve a society in which cars, people and the environment co-exist harmoniously – and plans to continue strengthening this product line.