Smart Applying Electrification Across All Models In The Range 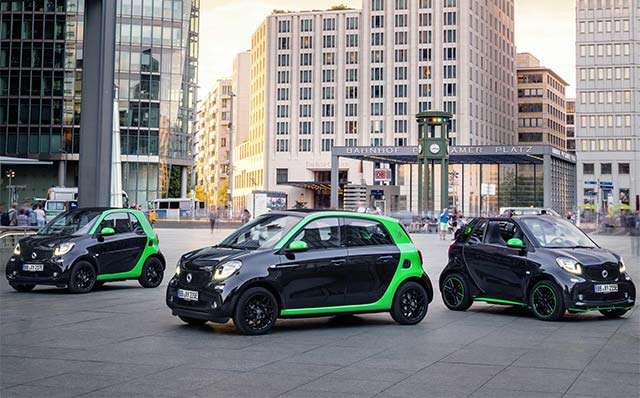 Daimler’s smart brand will be the only car manufacturer worldwide currently to offer its full model range with both combustion engines and all-electric drive, when it launch the new fourth-generation of the smart electric drive this spring.

In Germany prices for the smart fortwo electric drive start at €21,940 – recommended retail price including 19% VAT. With eye-catching design details in electric green the special model smart electric drive greenflash is a highlight for the market launch. This special smart electric drive will be available as a coupé and a cabrio with prices starting from €27,839 (incl. environmental bonus: €23,459). 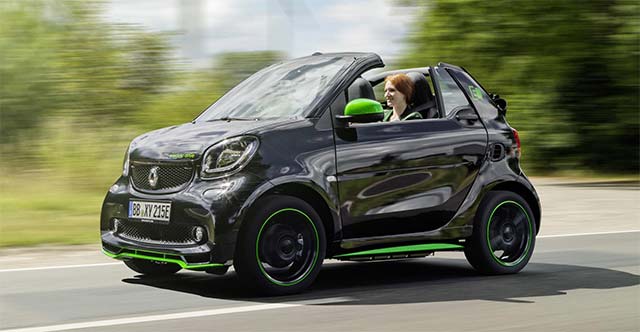 A 60 kW (81 hp) electric motor runs at the rear of the smart electric drive and transmits its power via a constant ratio to the wheels. Powerful torque of 160 Nm is immediately available from a standstill. The electric drive has a range of approximately 160 km (100 miles) – ideal for local emission-free mobility in urban areas. The maximum speed is electronically limited to 130 km/h (81 mph) to maximise the range.

The electric motor takes the form of a separately excited three-phase synchronous motor. This configuration incorporates an excitation winding on the rotor that is magnetised when current flows. The flow of energy from the high-voltage battery to the electric motor is controlled by the power electronics that are compactly interlocked with the drive unit.

Thanks to the power characteristics of the electric motor, the smart needs just one single fixed gear ratio. There is no need for any gear changing – a major advantage in dense city traffic. To reverse, the engine’s direction of rotation changes. The drive is produced in Renault’s plant in Clèon, Northern France.

The smart is equipped with a lithium-ion battery from the Daimler subsidiary Deutsche ACCUMOTIVE. The company based in Kamenz, Saxony, has been building the electric heart of the smart electric drive since 2012. 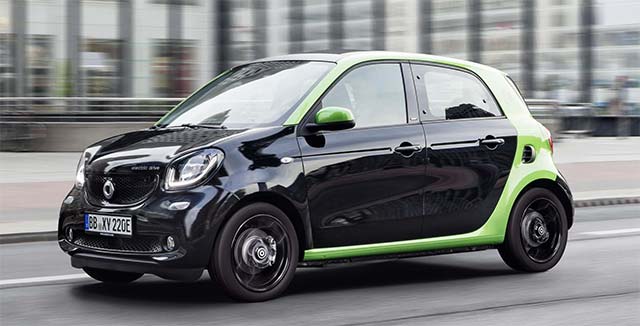 The battery has capacity of 17.6 kWh and is cleverly housed in the vehicle underbody between the two axles in a safe position that is favourable for the vehicle’s centre of gravity. The battery consists of 96 flat cells and the cell chemistry has been improved compared with the predecessor battery.

To strengthen customers’ trust in the innovative drive technology, smart is issuing a battery certificate and therefore a service commitment for the high-voltage battery for the first time. This guarantees that the maximum energy content is not less than the specified battery capacity – over eight years and/or to a mileage of 100,000 kilometres.

All smart electric drives have a powerful on-board charger as a standard feature. This enables an empty battery to be quickly charged. In the USA and the UK the charging time is 2.5 hours – half as long as for the predecessor. With the “smart control” app the charging process can be conveniently monitored from afar and functions such as intelligent charging can be controlled (see the corresponding section for details).

From the autumn of 2017 a particularly powerful 22 kW fast charger will be available as an option in Europe. This enables the smart electric drive to be charged much more quickly: in less than 45 minutes (0-80%) when local conditions allow three-phase charging. 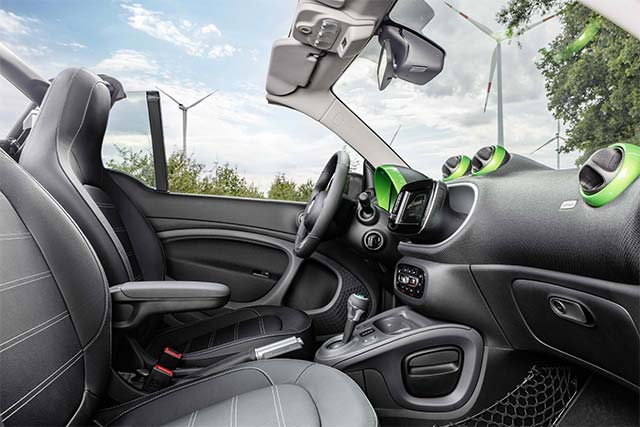 Furthermore, smart offers a Wallbox as special equipment. This enables the vehicle to be charged with a higher charging capacity. The Wallbox must be installed by a qualified electrician and correctly connected to the mains supply.

As well as the basic drive program the smart electric drive driver can select the ECO mode. This is designed for a particularly efficient driving style. In addition, the maximum speed is limited, the accelerator pedal curve adjusted and the maximum recuperation level is pre-selected. Furthermore, the air conditioning control adjusts the outlet air temperature from the air vents to reduce the energy consumption. 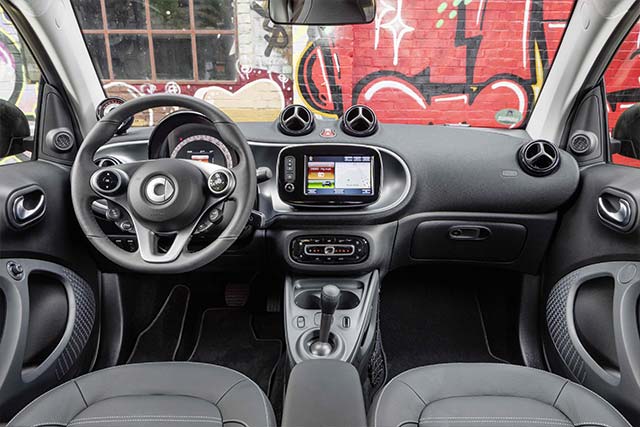 The driver can deactivate the ECO program with the kickdown function if necessary, for example for an overtaking manoeuvre. Pushing the accelerator pedal right down activates a temporary boost. This enables maximum acceleration with defined maximum battery power if the current charge level and the temperature of the battery allow this function.

In overrun mode or when braking the vehicle’s kinetic energy is converted into electrical energy – this is called recuperation. The electric motor then operates as a generator and generates braking torque on the wheels. The electrical energy generated flows back to the battery. The attainable level of energy recuperation depends on the state of the battery (charge level and temperature).

The smart electric drive models have anticipatory radar-based recuperation as a standard feature that is active in the basic drive programme. The traffic situation is monitored with a radar sensor and a recuperation level that suits the current situation is selected. The electronically controlled recuperation takes place in five levels as soon as the driver takes their foot off the accelerator pedal (overrun mode). If the road is clear coasting is activated. 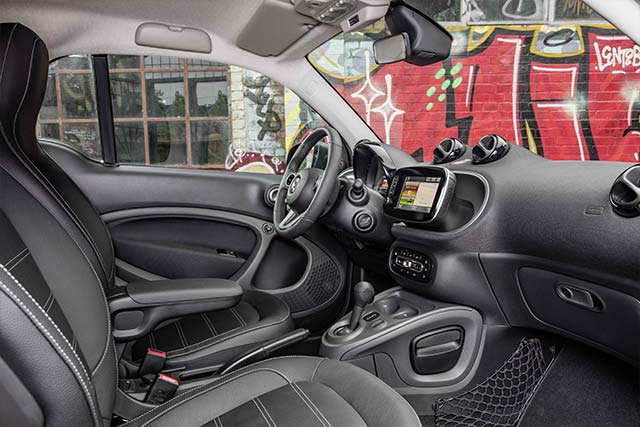 The data for the new smart electric drive at a glance:

With the start of the first electrically driven test fleet in 2007 in London, smart also took on a pioneering role in the field of electric mobility when 100 smart fortwo electric drives took to the roads of the British capital – with great success.

In 2009 smart launched the second generation of the smart fortwo electric drive, with the model introduced in 18 markets. The objective was to gather as much experience as possible about how customers use and charge electric vehicles. The huge demand exceeded all expectations. Instead of the planned 1000 vehicles more than 2000 smart fortwo electric drives were produced in Hambach.

From June 2012 the third generation of the smart fortwo electric drive also succeeded in winning wide-ranging buyers for its innovative and forward-looking drive concept. Moreover, in 2013 the smart fortwo was the first all-electric vehicle from a European importer in China. In Germany, the electric smart established itself as the market leader among battery-electric vehicles within a very short space of time with a market share of around 40 percent and was able to maintain this position for three years in a row.