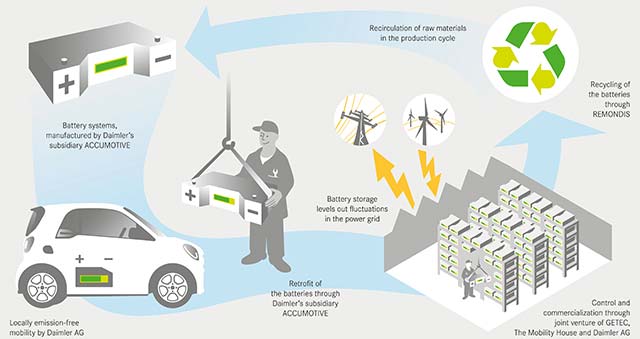 The world’s largest 2nd-use battery storage is starting up. The 13 MWh project is now nearing completion after a construction time of just under one year: a total of 1000 battery systems from second-generation smart fortwo electric drive cars are being grouped into a battery storage in Lünen, Westphalia.

The first power units are already in the grid. The 13 MWh battery storage will put its full capacity at the disposal of the German energy market before the end of this year. The output will be available to the winner of the weekly auctions among the network operators for primary controlling power range, with fully automatic energy storage and feed-in.

As energy is increasingly fed in from fluctuating, renewable energy sources such as wind farms or solar power stations, high-capacity battery storages are the key to stabilising power networks. According to figures from the German Ministry for the Economy and Energy (BMWi), 40 to 45 percent of power consumed in Germany is to be generated from renewable resources by 2025, increasing to 55 to 60 percent by 2035.

Efficient management of energy and material resources also applies to all components used in electromobility. The joint venture between partners Daimler AG, The Mobility House AG and GETEC has a future-oriented answer to the key question of reusing electric vehicle battery systems with this 2nd-use battery storage. Because the lifecycle of a plug-in or electric vehicle battery does not end after the vehicle’s operating life. If used in stationary power storage, the systems are fully operational even after the service life guaranteed by the manufacturer – with slight capacity losses only of secondary importance. Cost-effective use in stationary operation is possible for at least an estimated ten years longer. Reusing the modules from electric cars in a battery storage doubles their economic value and also demonstrably improves their eco-balance.

With the project in Lünen, the four partner companies cover the entire battery added value and 2nd-use chain: From the manufacture and configuration of the battery systems by Daimler subsidiary ACCUMOTIVE and the corresponding range of electric and plug-in hybrid vehicles from Daimler AG to the installation and marketing of the stationary battery storage to the energy markets by The Mobility House and GETEC, and finally the recycling of these battery systems at the end of their lifecycle and the return of the valuable raw materials to the production cycle, which will be the remit of REMONDIS.