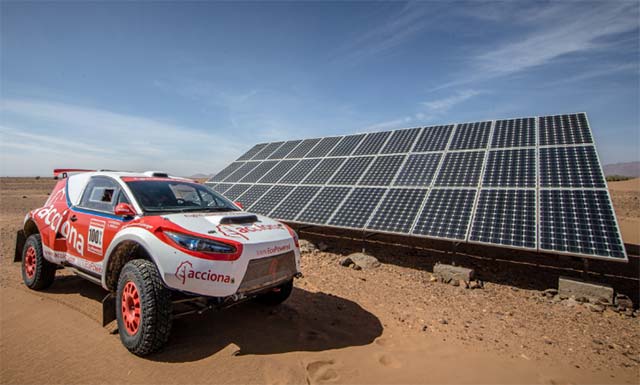 Spanish energy firm Acciona will compete in the Dakar Rally next month in Latin America for the third straight year with the only electric vehicle of the gruelling off-road race.

“Next January in Asuncion (Paraguay) we will once again cross the starting line of the Dakar, and we will again be the only zero emissions vehicle,” the company said in a statement.

“We compete in Dakar 2017 with an electric vehicle because we believe 100% in the potential of renewable energy,” it added on the Facebook page of its Dakar Rally team.

Some 316 vehicles, including 83 cars and 146 motorbikes, are registered for the 39th Dakar Rally, which will be staged over nearly 9,000 kilometres (5,600 miles) from January 2-14 in Argentina, Bolivia and Paraguay.

The race will set off from the Paraguayan capital of Asuncion, with race sporting director Marc Coma promising “the toughest edition in the history of South American rally-raiding”.

Acciona entered its car in the 2015 Dakar Rally, making it the first zero-emissions vehicle to compete in the event, but it pulled out after just three days due to a navigation system malfunction.

The Team Acciona EcoPowered car, which features a lithium battery pack that is supplemented by solar panels, was disqualified from the 2016 Dakar Rally after it failed to make it to the start line for the 11th stage on time.