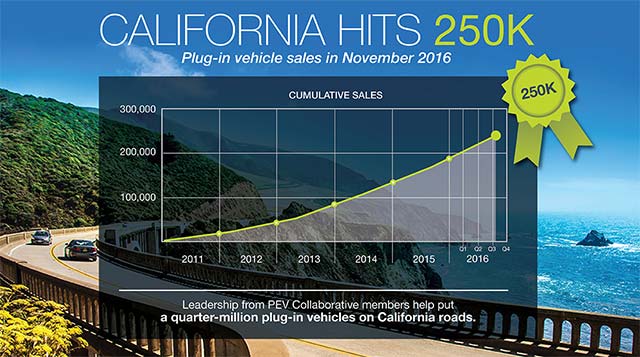 The California Plug-In Electric Vehicle Collaborative announces a major milestone in Golden State transportation history: according to projections, more than 250,000 plug-in electric cars will be sold this month in California since they hit the market in 2010.

“Just a few years ago, you could count the number of plug-in models on one hand. Times have changed,” said PEV Collaborative Executive Director Christine Kehoe. “Today, anyone thinking about buying a car can check out more than 30 electric models. And with federal and state rebates, they are more affordable than ever.”

Especially promising are upcoming models from carmakers including Chevrolet, Nissan, Tesla and others that will exceed 200 miles on a charge and cost around $35,000 (with incentives). Options like these tackle two common concerns among potential buyers: affordability and range anxiety.

BMW Group, which has earned critical praise for its innovative fully electric i3, will offer a total of seven models in the U.S. by spring of next year with an electric drivetrain or as plug-in hybrids. The company has also announced plans to electrify all of its brands and model series, including an electric SUV for the 2020 model year.

Nissan, who’s LEAF surpassed 100,000 sales at the national level earlier this month, is looking forward to launching the next-gen model that will go 200-miles on a single charge.

“Californians can take pride in driving the nation toward a zero-emission future,” said Air Resources Board Chair Mary Nichols. “A widespread shift to zero-emission vehicles is technologically feasible and economically sensible. It will clean our air and protect our climate.”

“Transitioning to cars with no tailpipe pollution and incentivizing the infrastructure that supports them will help California meet climate change goals and federal clean air standards,” said Energy Commissioner Janea A. Scott, who also serves as the chair of the PEVC. “PEV Collaborative member coordination and leadership have played a significant role in helping California meet the milestone we are celebrating today of 250,000 electric vehicles sold to date.”