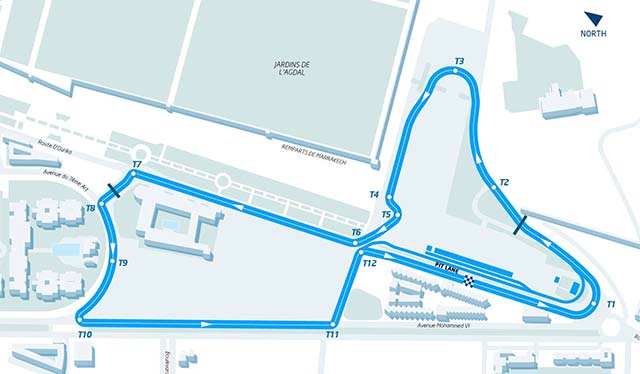 For the 23rd time, a grid full of Formula E cars will assemble on November 12, when the inaugural Marrakesh ePrix takes place.

As the series becomes more established, so more interesting statistics are created. Here are some of the more significant and relevant to date.

Coming up next – Marrakesh

– It will be the first time Formula E has raced in Africa, taking the number of continents the series has visited to five

– At 2.97km, the Circuit Moulay El Hassan is the second longest track used by Formula E to date. Only the Beijing Olympic Park track was longer

– This version of the track was used by the World Touring Car Championship in 2016. Pole position for the second of the two races was set by Honda’s Rob Huff with a time of 1m21.743

– Jose Maria Lopez is the only driver to have raced on this version of the track, he was the winner of the second race and took second place in the first

– Ma Qing Hua raced on the previous Marrakesh street track, which the WTCC used from 2009-2015. He was second in the first race of the 2015 double-header (Lopez was the winner)

– Sebastien Buemi’s victory in Hong Kong was his seventh in Formula E, increasing his record number of wins. It was Buemi’s 12th appearance on the podium, but Lucas di Grassi’s run to second means he’s still the man to have sprayed the most Mumm champagne, with 14 top-three finishes

– Di Grassi gained 17 places from his starting spot of 19th, setting a new record for the most places gained in a race. The previous best was 16, which was jointly held by di Grassi (Putrajaya Season 1) and Buemi (Putrajaya Season 1 and Buenos Aires Season 2)

– The driver who has gained the most places from their starting position in Formula E is Antonio Felix da Costa. The Andretti driver has made up 69 places from his grid spot to date

– Nick Heidfeld drove a charging first lap in Hong Kong – rising up four places. But this is a long-way short of the most places gained on an opening lap. That honour belongs to Karun Chandhok, who picked his way through the debris in Monaco in season one to gain eight places from where he started

– The king of the first-lap gains is… da Costa, who has picked up 25 places during the opening lap of the 18 ePrix he’s contested so far
Active sequences

– Renault e.dams is the only team to have scored points in every single Formula E race. There are only three occasions that it has not led the Teams’ points standings – after rounds one and two in Season 1 and after round two in Season 2

– Sebastien Buemi is on a 17-race streak of scoring points in races that dates back to Long Beach in season one. Stephane Sarrazin is on a 13-race point-scoring streak that started in London in season one.