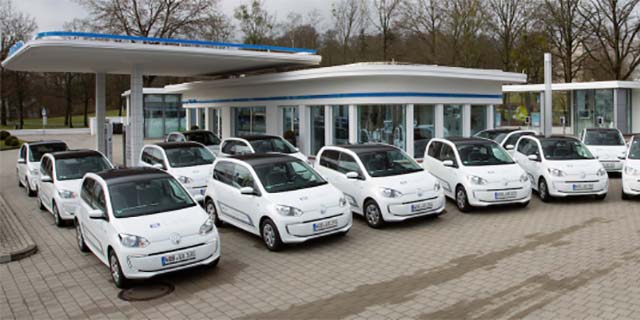 The “INEES” research project (‘Intelligent integration of electric vehicles into the power grid for the provision of system services’) has submitted its final report.

The partners – Volkswagen AG, Lichtblick SE, SMA Solar Technology AG and the Fraunhofer Institute Wind Energy and Energy System Technology (IWES) – point to the fact that it is technically possible to absorb power fluctuations by connecting electric vehicles to the power supply. The research results will in future help to link electric mobility with the energy industry.

The electrical power supply as experienced a fundamental change with the energy revolution. More and more local, flexible units (such as photovoltaic systems, combined heat and power plants, etc.) generate electricity; however they are often dependent on different factors such as sunlight or wind levels. In addition to fluctuations due to varying power consumption, disparities in the electricity network can occur. At the same time, batteries in electric vehicles offer large storage potential and are thus an additional way to compensate for these fluctuations.

Part of the “INEES” research project (which ran from 1 June 2012 to 31 December 2015) investigated the possibility to achieve a balancing and stabilising effect on the power grid using a pool of electric vehicles. The idea behind it: the pooled batteries of electric vehicles form a power storage capability of significant size suitable for mass consumption, which can compensate for fluctuations in the power grid. The vehicles could load electricity as well as put surplus energy back into the power grid. This idea was tested in a one-year fleet trial. SMA Solar Technology AG developed a bi-directional DC-charging station for this purpose designed as an experimental system in a small production run of 40 devices. Volkswagen AG equipped 20 e-up! electric vehicles with a bidirectional charging function and built in a communication link between the charge controller and the Volkswagen “backend” computer centre. A mobile phone app was developed as a user interface. Participants in the fleet trial could use this app to see how their personal driving behaviour and the requirements of the electricity market are linked together. They allowed their vehicle battery to be used to support the power grid whilst basically experiencing no restrictions to their everyday mobility. An incentive system developed in the form of a SchwarmStrom bonus also contributed to the project. Participants received this as soon as they allowed some of their battery capacity to be released for general use.

Lichtblick, an energy and IT company, integrated the released electricity from the vehicles into the energy market using its SchwarmDirigent control software. The result: electric vehicles can provide a safe and secure power reserve for the power grid with a short reaction time. Analysis has shown that the provision of balancing electric power by an electric vehicle pool is not economically viable under current conditions. Planned legislative changes, further technical developments and the transformation of the energy system can significantly improve the economic factor in the future. The Fraunhofer Institute IWES analysis of the distribution networks load has shown that only network grids that are already heavily used today can expect short term shortages. In the medium term fluctuations in demand need to be allowed for when expanding the network.

The “INEES” research project, hailed by the federal government as a “lighthouse project in electric mobility”, was funded by the Federal Ministry for the Environment, Nature Conservation, Building and Nuclear Safety.